Climate change is natural… according, that is, to Britain’s best-known celebrity gardener. So there’s nothing we gardeners need to worry about then, is there?

Back in December my garden experienced a few memorably cold days of white-over frost with, on one night, an impressive -9.5°C registering on the outdoor thermometer. I love this kind of  genuine winter weather, when the ground turns to rock, and the grip of the season is so tight you wonder how your garden will ever break free. After a run of middle-of-the-road, mild and nondescript winters, frost, snow, freezing fog and plummeting mercury are to be celebrated. 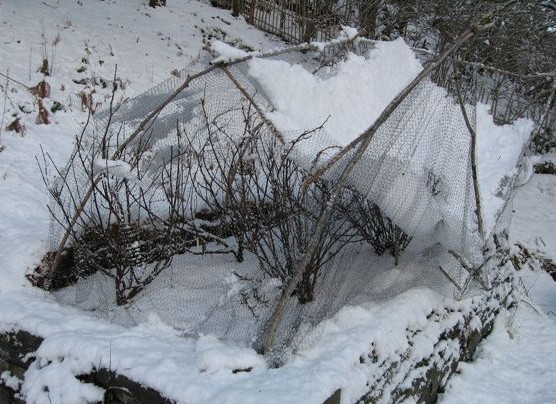 We should celebrate winter, even if sometimes it catches us out…

We should cherish these bouts of what we’ve come to think of as ‘real’ winter, as well as real spring, summer and autumn weather, because taking even the most dispassionate look at the growing evidence about what future weather patterns might hold, it’s clear that each spell of ice-etched winter could be our last. I’m talking, of course, about the potential effects of global, human-induced climate change.

The freeze over, a soggy thaw drove me in from the garden and, flicking through the February 2006 issue of Gardeners’ World Magazine, I happened on an article called ‘Changing times’. Billed as a piece ‘… to help our gardening adapt to the shift in seasons,’ it sounded interesting, so I read on. My eyes widened with each paragraph and a chill went through my soul. The writer, having dismissed atmospheric warming as being down to little more than ‘wobbles’ in the earth’s axis, declares that, ‘In short, climate change is natural. The real news would be if our climatic conditions remained static, but that wouldn’t sell newspapers.’ Surely the media can’t be to blame for the greatest environmental challenge we’ve ever faced – but let’s not get sidetracked. I was gobsmacked. Apart from the fact that a fellow organic gardener was saying it, it was coming from arguably the nation’s most respected and best-known gardener: Alan Titchmarsh.

“I’m not one of those who believes Armageddon is on the way. It may be something to do with my innate optimism, but I don’t think I have my head in the sand.”

For such a high profile gardener as Alan to make such a sweeping and dismissive statement, I find deeply troubling and verging on the reckless. Is he seriously questioning the mounting scientific consensus on man-made climate change? I expect an awful lot better from someone who can, with just a single sentence, wield such influence over this gardening nation. And before any Titchmarshophiles start snorting their fury, let me explain why.

As an organic gardener, I care deeply for the earth, but I also care about the impact – good and bad – of my gardening on the world around me. I didn’t used to think like this, and believe me, I wish I didn’t have to. One of my most powerful responses to what a climate-uncertain future might hold is an emotional one. The thought of losing those frozen winter days forever fills me with a deep sadness, which deepens further when Alan writes, ‘… our planet has warmed up before – there were warm tropical periods between the Earth’s many ice ages and mini-ice ages, and they happened quite quickly.’

I have no real desire to see dahlias flowering in early winter, even if it is the dazzling ‘Bishop of Llandaff’.

No one would dispute that, but ‘quite quickly’ is a very relative term, and Alan’s argument attempts to use naturally occurring climate change over millennia to normalise human-induced change within decades. I don’t want ‘quite quickly’ hurried along by the release of greenhouse gases and turned into rapid, runaway and unpredictable. I want climate change to be natural, to take aeons and be imperceptible to generations. Just as it should be. I don’t want snowdrops and frogspawn in autumn, nor am I much fussed about having dahlias flowering in November. As for Alan’s ‘wetter winters’ and ‘hotter and drier’ summers: no thank you.

Emotional outburst vented, let’s get down to some nitty gritty. Alan’s dismissal of climate change as ‘natural’, and therefore, by implication, nothing to fret about, highlights what is probably, in environmental terms, the fundamental problem with the gardening industry: the almost total, and conveniently maintained, lack of any real connection between gardening and the environment. Yes, there are the familiar, high profile topics, like the use of peat in composts, that usher us towards a bag of New Horizon, but for many – let’s call them the not-yet-organic – the huge environmental benefits of organic gardening remain undiscovered.

So what are these massive benefits? Surely gardening is just a hobby; why should all gardeners be signing up to the environmental cause? The answer is simple: in a world where environmental pressures grow daily, there’s a palpable sense of helplessness about what difference we, as individuals, can make. We can do all the recycling and fit the house out with low-energy bulbs – which is laudable – but where we can make a real difference, on so many levels, both locally and globally, is in our gardens.

“Where we can make a real difference, both locally and globally, is in our gardens”

Let’s tot up what benefits an average, established organic garden, growing vegetables, fruits and flowers, can bring: self-sufficiency in some food crops; fresh, residue-free produce; not a ‘food mile’ on the clock; zero packaging, meaning less use of natural and finite resources, and less waste; fewer shopping trips by vehicle, so less burning of fossil fuel and less of a contribution to global warming; no use of synthetic, oil-hungry pesticides; in situ recycling of organic matter through composting; a booming garden ecosystem; and the most minimum-impact, maximum-benefit workout for body, mind and soul there is. That’s a pretty impressive difference, even if we only achieve some of it.

Further on in Alan’s article, a glimmer of hope; ‘So if we agree the climate is changing, and that we must all do our bit to ensure we don’t exacerbate the situation, where does this leave gardeners?’ Sadly, what follows is not a call to embrace gardening as an empowering, accessible way of tackling environmental issues, but more debunking of ‘the climate change bandwagon’ – and a plug for his new TV series and book. He can be forgiven for the latter, but not for his part in a widening of the divide between gardening and our environment – or for encouraging gardeners to sink, like him, into climate change denial.

Alan’s opinions are symptomatic of an alarming and growing trend among some gardening writers and broadcasters. They peddle the so-called ‘benefits’ of global warming (‘we can grow all those tender plants’), but seem oblivious to the fact that, in many ways, gardening, and the industry supporting it, is actually helping to stoke climate change. This new wave of garden communicators, willing to see climate change as mere opportunity, in print or at the checkout, strike me as being seriously ecologically challenged.

As gardening and the environment become ever more intimate bedfellows, there’s a painful rub looming for the gardening industry. As environmental awareness grows, a greater sense of inquiry tends to blossom alongside it. As the powerful, positive effects of organic gardening inspire more of us, we’ll become more discerning. We’ll pass over peat-based composts without a second thought, start asking awkward questions at the garden centre about the origins and ecological credentials of their wares, and drive the real, long-overdue ‘greening’ of gardening from the roots up.

And just think, as this unstoppable band of organic gardeners blooms across the land, we might, with any luck, still be able to enjoy the grip of those freezing winter days and these warm, encouraging bursts of spring. Just as nature intended.