Everyone’s green nowadays is a wishful myth taking root in the gardening industry, but there’s only one kind of gardening that’s truly in tune with our planet’s limited resources.

Am I the only organic gardener who finds a visit to a garden centre, especially at this time of year, an uncomfortable and disturbing experience? The very phrase ‘garden centre’ is now something of a misnomer, at least as far as the word ‘garden’ is concerned, especially in the case of the megastores. Once you’ve tossed the tinsel aside, steered past the bauble-fest, and plotted a safe route through the artificial snow to bypass Santa’s grotto, you might just stumble back into the ‘gardening’ zone. If it weren’t for the saving grace of a few green leaves (albeit of some dull evergreen shrub) you might be forgiven for thinking that you’d strayed into just another glittering shrine to Western consumerism. 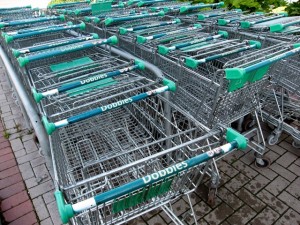 Next time you grab a garden centre trolley, spare a thought for the signals sent out by the kind of stuff you put in it.

Fortunately, we organic gardeners with a food-growing flair are cannier than most at cutting a path through the tat in these temples of temptation; we generally know what we want and we know that earth-friendly organic gardening is essentially a buy-very-little sport. I bet the watchers of the CCTV screens in these soulless supercentres can spot an ‘organic’ a mile off. We’re the ones devoid of the fixed supermarket gaze of the zombified consumer (how else do they get through it?). The cameras will track us as we sweep past the chemical aisles, cast a discerning eye over anything dubiously labelled ‘organic’, frown at an overpriced (and imported) ‘bee box’, and head for the compost zone. Over the last year, my own bit of garden centre consumption has consisted almost entirely of buying peat-free compost and grabbing a cup of organic tea (I gave the cameras a parting wink).

The truth is that organic gardeners are bad news for establishments where the prime objective is to keep the tills a-bleeping. You could say we’re also bad news for the economy – but only if you subscribe to the myth that endless economic growth is the only game in town, and that it can continue unchecked on a planet with finite natural resources. The flip side, of course, is that we organic gardeners are simply off the scale when it comes to having a positive impact on the world around us. We know all about working with nature and respecting its limits, and we feed ourselves.

Think about it: we’re being bombarded day in and day out with messages telling us that to really ‘go green’ costs money (think solar panels, home insulation, hybrid cars), and yet as earth-friendly, organic gardeners we tend to spend less as our resolve deepens. The better and savvier we become at growing organically, the deeper green we become. We could, perhaps, even puff out our muddy chests and claim to be the ‘original’ shade of green.

Every time we buy something we send a small but powerful signal down the supply line that tells someone somewhere that we wanted it – and that we probably want more of it. We create a demand which sets off a whole chain reaction of events, from the manufacture of whatever it is that we’re indicating we want, to its packaging, marketing, transportation and eventual sale. Each link in the chain, as it gears up to meet that signal of demand, begins drawing in both energy and resources. 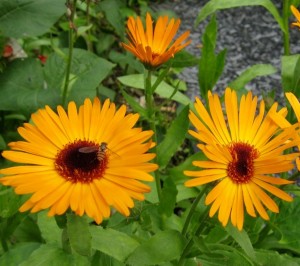 I don’t need resource-hungry chemical sprays to keep aphids in check, just some pot marigolds to lure in hoverflies that lay their eggs among any sap-sucking hordes.

Last summer, aphids decided to make a meal out of my sweet potatoes. For about a week I managed to contain their antics, by squidging them between finger and thumb, but then I dropped my guard for a few days. Despite vain blasts of (carefully targeted) eco-friendly washing-up liquid, the population exploded, and I was all squidged out. But just as desperation set in, the hoverflies turned up, lured by nearby pot marigolds. I watched, mesmerised, as they quietly and methodically laid eggs among the sap-sucking hordes. Within a week the hoverflies’ larvae had cleaned up. Job done, not a penny spent, and no signal of demand sent anywhere. The only energy required was in making a mental note to renew my own faith in nature.

Losing my bottle and reaching for an insecticide would, naturally, have sent out a very different message. If I’d done for one of the ready-to-use sprays (just point and squirt), I would effectively have been picking up a dollop of oil: the plastic container, and most synthetic pesticides and fungicides, are, essentially, made from crude oil, a finite natural resource.

The resulting bleep at the garden centre checkout would have sent the signal off down the wires to head office, and thenceforth on down the supply line until it finally reached the chemical manufacturing plant (located who knows where). On receipt of the signal, more oil would have been called up for making the next ready-to-use spray bottle. Meanwhile, more energy, derived from burning finite fossil fuels such as coal and natural gas – whose pollutant emissions are causing global warming – would have been used both to make the spray and to power up the whole supply chain.

Let’s not forget that extracting the raw materials to sate the signal of demand comes with its own set of associated dangers – from oil spills and water and air pollution to the irreparable destruction of our landscapes. And what are conditions like for those working on the production line at the factory where the bug spray is made? Do they enjoy the same levels of employment protection and safety at work as we take for granted? You’ll have a hard time of it tracking down a bottle of a man-made garden chemical carrying a ‘fairtrade’ symbol.

“Gardening organically might not do much to fatten profits, but it will give you sway over your plot’s connection with the wider world”

Looked at this way, mainstream gardening doesn’t seem quite as ‘green’ as we’re increasingly being told it is – told, that is, by the garden centres themselves (not to mention their insidious televised equivalents). You’ll hear a lot in the years ahead about just how ‘green’ garden centres (and the gardening industry) are. Judging by the noises coming from recent gatherings of the great and the good of the garden trade, they’ll be selling their eco-credentials hard – no matter how illusory they actually are.

My advice is to take it all with a very big sackful of rock salt, and to think greenwash rather than green. Indeed, one chain, the Garden Centre Group (formerly Wyevale) has announced that it’s ditching some of its environmental policies because it thinks it’s green by default, and sees them as ‘gimmicks’. Another, Dobbies, is busy building huge out-of-town retail temples accessible only by car, just when the world is waking to the idea that it might actually be a wise move to start using our cars a little less. Remind me to give those temples of consumerism a miss.

Food gardeners in particular need to be on their guard. The gardening industry is gearing up to cash in on the burgeoning interest in kitchen gardening, and it’ll be pulling out the stops to milk it for all it’s worth. 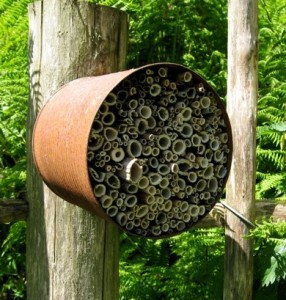 Why spend money on a solitary bee nest box when you can make your own from a tin can and some hollow plant stems?

As organic gardeners we’re instinctively opposed to the unnecessary and the excessive. We prefer to engage with nature to keep our soil and plants in good health, to embrace thrift, and to utilise resources close to home, rather than rely on products emanating from way down a long chain of far-off, unseen events over which we have no control.

Gardening organically might not do much to fatten profits, but it will give you sway over your plot’s connection with the wider world, and any demands you might be making on it. You might feel the odd pang for a bit of garden retail therapy, but you can always take heart from knowing that in the grand ecological scheme of things, less really is more.