At the end of an abysmal growing year, only one thing is for sure: the familiar rhythms of gardening are gone for good.

I’ll let you into a secret: there’s a part of me that really wishes I wasn’t gardening here and now. I often feel that any time would actually be better than this. I’ve felt this need to rewind to some kinder, calmer spell in my gardening lifetime more deeply this year than ever before. Autumn always brings its own fiery poignancy as we bid abundance farewell, but for me there’s a deeper sense of sadness – of loss, even – that will linger long after the larches towering over my garden have shed their golden spectacle. 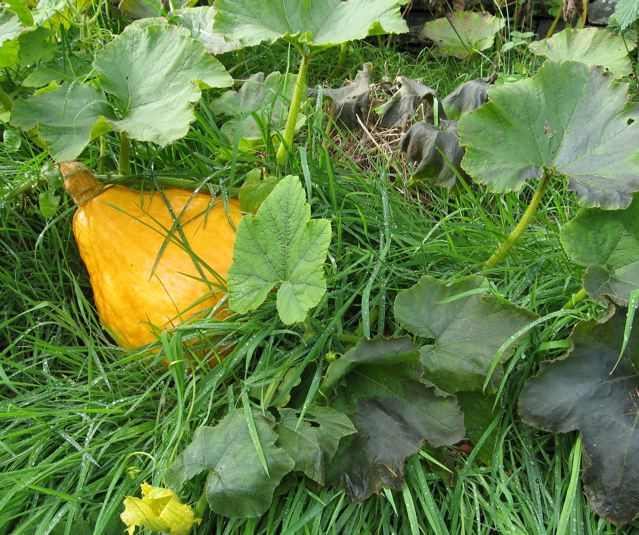 After weeks of rain-stopped-planting delay, my winter squashes finally got planted outdoors, where they sulked for a few more weeks before making final dash for growth – straight into the grip of Jack Frost.

One thing more or less all gardeners are agreed on is that 2012 has been a bummer of a growing year. Just as gardening magazines are seducing us with mouthwatering images of ‘autumn abundance’ (plucked, of course, from the archives of better years), many of us are finding that our harvest is little more than a miserable squib, if that. Some stuff hardly grew, some never grew at all, some didn’t even come up. And some, like my winter squashes, which waited rain-delayed weeks to be planted, is only now romping away – straight into the arms of Jack Frost.

But this was more than just a ‘bum year’, and we’ve had our fair share of those. This was the year when our gardening hopes, dreams and expectations, when gardening itself, changed for good. It’s been the year when hope became disappointment, dreams turned to slug-filled nightmares, and expectations were drowned, in every sense, by the wettest summer in a century (and the second wettest since records began). Gardeners, it must be said, got off relatively lightly; no-show carrots due to waterlogged soil can’t ever compare with filthy floodwater rushing through your home.

“This was the year when when gardening itself changed for good”

Success, if it came at all, was largely confined to what we grew under cover, in greenhouses and polytunnels. Here, protected from rain and with a lift in temperature, even on a dull summer’s day, most plants at least made a go of it. Under cover we have some ‘climate control’, and this is why I’m thinking of adding more covered areas, powered by clean and renewable modern sunshine, to my own garden.

Who in their right gardening mind wouldn’t want to rewind to more ordered, assured days, when spades really were spades and seasons really were seasons? – when, bar an odd hiccup, we sowed and planted with a certainty of bountifulness that can no longer be relied on. I know I would. And spare a thought for those who started gardening for the first time this year – the year when gardening changed. How do you convince them that this is not anywhere near as good as gardening can get? 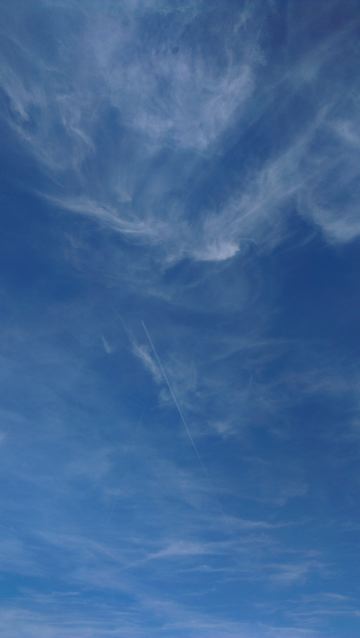 Reducing energy use is one way to curb our carbon output. These human-made clouds form out of the exhaust contrails of aircraft – possibly those flying gardeners away on a gardening holiday…

Of all the reasons I became interested in gardening, the one that moves me most is the one that germinated last: a desire to do something about climate disruption by getting my hands dirty. It’s not something I ever planned, nor is finding myself on the climate front line something I savour, but that’s where we gardeners are: up close and personal with spells (if not entire seasons) of increasingly extreme weather. Meagre pickings in your trug or basket are what a warming world can look like; farmers and growers are in the same boat. If you’re a gardener, you can’t fail to feel the disruption going on around you. It makes gardening less predictable, less straightforward and, if you grow food, less productive. It can easily make you want to give up.

“That’s where we gardeners are: up close and personal with spells of increasingly extreme weather”

What motivates me, regardless of discouragements, is that gardening is possibly the most can-do climate-calming activity there is – and it’s one which anyone, anywhere can join in with. The other stuff that helps to reduce our carbon footprints – insulating lofts, reducing energy use, fitting solar panels – is all well worthwhile, but it isn’t much fun, and you don’t get such muddy hands. You don’t get to spend time outdoors, or to eat fresh, untravelled food, or to cut your own flowers, or to lose yourself each day in the natural world. Insulating a loft happens once. Gardening happens forever.

Climate chaos and the madcap weather it brings is also forever. We’ve set free enough carbon dioxide to guarantee it; the more we liberate, the more – and increasingly severe – chaos we’ll get. There’s no doubt that gardening is going to get tougher, and there’s a cruel twist: the very thing that can help to ease various environmental burdens – growing some of our own food organically, with carbon-frugal inputs – is likely to be the most challenging of all.

From now on, gardening will be more unpredictable. We have no real idea what to expect from year to year, or even from season to season, other than the unexpected. Away from our greenhouses and polytunnels, we can’t control a thing. With a bit of luck we’ll get a few ‘good’ growing years here and there. But with the prospect of more bum years than good ones, we’ll need to become ever more innovative, as well as more determined, just to get something home-grown that’s half-decent enough to eat.

As much as I’m all for doing my bit to help ease up on our living world, deep down part of me still wishes I didn’t have to garden here and now. I don’t think I’ll ever stop mourning the passing of those times when, with warnings of climate chaos still only a murmur, gardening’s rewards were somehow more certain, more solid. I feel blessed to have grown in such times, but I’m always going to miss them.