As new research describes areas of the UK as ‘food deserts’, it’s time to pull down the garden fence and turn unproductive, resource-hungry urban ‘green spaces’ into edible havens.

This is the year when we become another species. Don’t worry, humanity isn’t about to be genetically modified en masse, but it is about to make a historic transition which will help shape the prospects for the very survival of the human race.

According to the United Nations Population Fund’s ‘State of the World Population Report’, during 2008 we will pass the point where half of the world’s population is living in urban areas. Within one generation 60 per cent of humanity – five billion people – will be living in cities. Each week the number of city dwellers grows by almost a million. That’s an awful lot of mouths to feed. 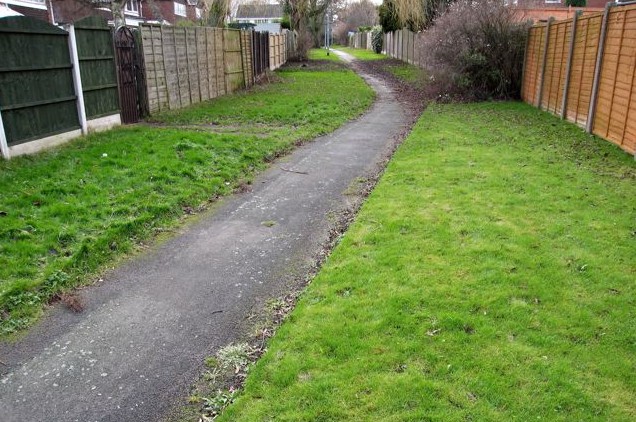 Much of the concern about how our species will grapple with this switch from predominantly rural to predominantly urban living focuses on developing countries in Asia, Africa and Latin America. Such countries lack the infrastructure and resources – housing, power, water, sanitation, roads – to enable them to urbanise rapidly yet sustainably. Today one billion people live in slums, 90 per cent of them in developing countries. In some places here in the so-called developed world people don’t fare much better, but we’ve been urbanised for longer, and we should have learned some lessons.

So it might come as a surprise – a shock, even – to learn that, according to recent research by Harper Adams University College (HAUC), here in the UK we now have large areas known as ‘food deserts’. This particular type of urban desertification has nothing to do with the erosion of soils pummelled to dust by dispassionate agribusiness. These food deserts are determined by distance: 500 metres to be exact. That’s 545 yards or a third of a mile in old money.

HAUC studied around 6,000 square kilometres across England, in both rural and urban areas. The research showed that in around 25 per cent of urban and 20 per cent of rural areas, people must walk more than 500 metres to reach a shop selling a ‘good amount’ of fruit and vegetables. In 1997, a Government health minister coined the term ‘food desert’ to describe an area ‘where people do not have easy access to healthy, fresh foods particularly if they are poor and have limited mobility’, adding that fresh food should be available within 500 metres of every home. It takes me about 20 minutes to walk a mile, so Government aspirations over ten years back were for ‘healthy, fresh foods’ to be within a seven-minute walk – a struggle if you’re elderly, disabled, or have any other problems getting around.

“You can view these snapshots in two ways. Everyday eyes might see welcome areas of open ‘green space’, while those of the organic gardener will see lost opportunities – but also enormous potential”

The research identified food deserts not just in shop-less rural villages, but also in affluent towns and estates, where most people drive to out-of-town superstores. The study suggests that health problems, such as heart disease and diabetes (often caused by enforced unhealthy eating), are costing the UK £10 billion a year in healthcare and lost productivity. Eight years into the 21st century, amid undreamt-of levels of material prosperity (at least in the West), we have food deserts? What on earth is going on, and what can we humble organic gardeners do about it?

How about pulling down your garden fence? The pictures illustrating this article were taken in January during a random walk around the residential area of a typical town in the English Midlands. There’s nothing like winter to strip our gardens, as well as the way we organise our lives, to the bare bones. Save a few redeeming evergreens, modern urban living is exposed, warts and all. It’s not always a pretty sight. You can view these snapshots of urbanity in two ways. Everyday eyes might see welcome areas of open ‘green space’, while those of the organic gardener will see lost opportunities – but also enormous potential. 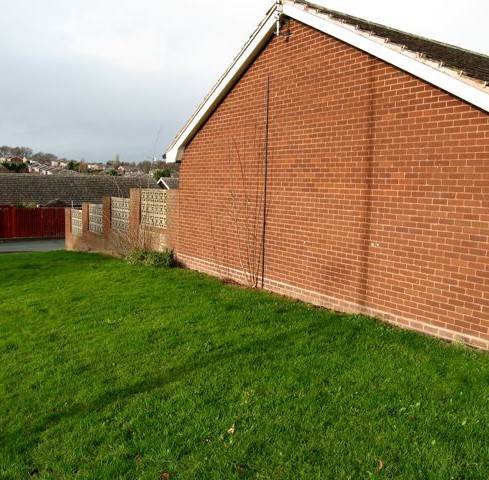 What’s striking about these pictures is the predominance of flat, green areas of nothing but grass dotted with trees, litter, canine faeces, paths, bare walls, and fences, fences, fences. I had a nosey peep over some of the fences to find largely the same flat green monocultures of grass, confirming what has always seemed to me the misguided notion that we are a nation of gardeners. Grass-cutters, more like.

But there were rare gems, too. Even in seasonal nakedness you can spot an organic garden: a path snaking through a small, meadow-like lawn; a pond; greenhouse beds bursting with oriental leaves; green manures quietly building fertility, with not a jot of bare soil to be seen; nest-boxes for birds, bees and others; compost bins; a wormery, wrapped up snug; walls trained from top to toe with fruit…

Imagine what would happen if we began pulling down those fences. The ecosystems of those organic gardens, the myriad life they support, would begin to flow out and colonise those biodiversity-impoverished spaces, which are currently ‘green’ in colour only. How about we think big, and actively pass these canine loos into the care of the people living next to them, and transform them into neighbourhood organic gardens. Imagine playing fields, currently the preserve of the Sunday morning few, transformed into a living lattice of modern, well-serviced, secure allotments.

Wildlife will have a field day, as dragonflies dart from garden to garden, emancipated hedgehogs roam freely between gardens at dusk, and countless other fauna spill out, creating an interlinking web of life. New wildlife ponds will see residents serenaded to sleep in spring, as frogs go about their annual frenzy. Children will run safe and free as the human element of the urban ecosystem regains a sense of cohesion and community, crime falls, and dog fouling and litter become things of the past. People will start looking out for each other again, proud of their evolving organic nirvanas.

After some squirming, local politicians will embrace the idea – especially when they see the financial savings from not having to send out a fleet of fossil fuel-hungry mowers to scalp local ‘green spaces’ and playing fields throughout the summer. And there will be no more ugly, dead brown verges sprayed with weedkiller. 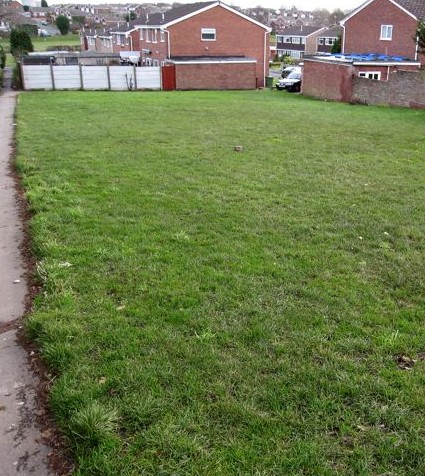 Well away from main roads, this grass monoculture could be gardened back to life and transformed into a space where children could play safely alongside beds of organic flowers, fruits and vegetables.

The money saved by not mowing our monotonous, unproductive green spaces could be used to establish community orchards, helping buffer our homes from the worst effects of the searing summers ahead. Cutting fuel use will help mitigate climate change, and when we do get extreme weather, such as flooding, neighbourhood organic gardens will play a key role in soaking up sudden downpours, relieving the pressure on already overburdened urban drainage systems.

A seven-minute walk might still not get you to a shop, but it will take you past trees and bushes, walls and fences hanging with ripening fruit, borders buzzing with beneficial insects, informal potager gardens linking personal with neighbourhood plots, footpaths edged with fragrant herbs, and well-loved allotments bursting with food. On a good day, you might even come across enough ‘please help yourself’ signs to feast on fresh, organically grown, food mile-free produce by simply savouring others’ surplus.

We don’t need to pull all our fences down – privacy is important – but if we were to take out just a few of the boards next to areas of green space, and engage organic gardening as a positive political force, we could start to unlock real biological potential. As a renewed sense of self-reliance bloomed, we could wave goodbye to food deserts.

Half of humanity already lives in urban areas. If we organic gardeners can’t find ways of harnessing the potential of our urban surroundings, of thinking outside the ‘green space’ box, of bringing food ever closer to where it’s eaten, and of germinating a new sense of neighbourliness and self-reliance, no one can. The towns and cities of the developing world will need examples of what can be achieved. Can we show them?