Having a year-round supply of fresh food from your plot ought to help in weathering any knocks to ‘normal life’, but reality could be quite different. 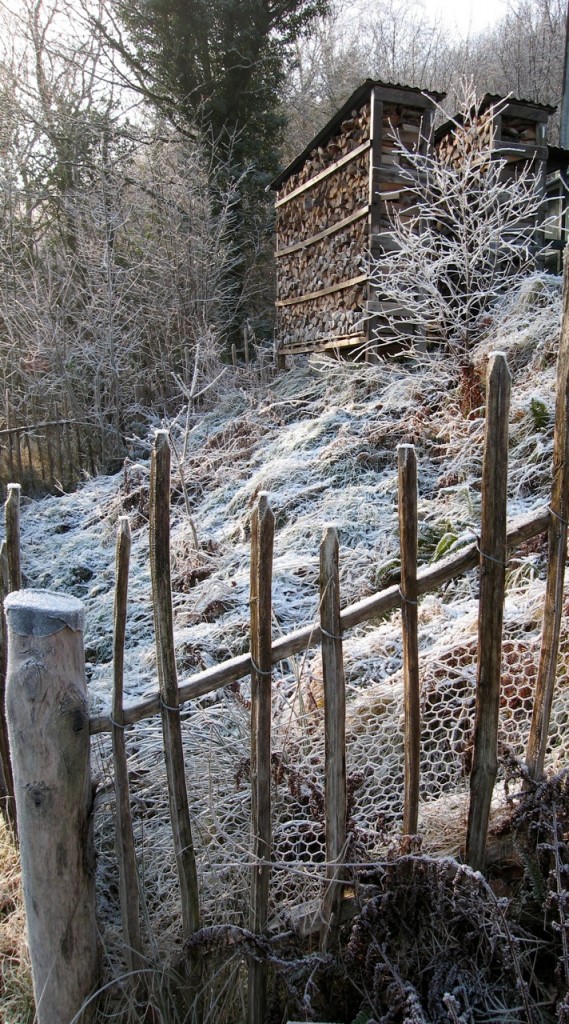 My garden’s sweet chestnut fencing is designed to keep out sheep and rabbits, but it would be no match for hordes driven by empty stomachs.

Barbed wire and baseball bats might not seem obvious topics to pepper a chat over a cuppa about kitchen gardening, but they’re signposts that conversations with a food gardening friend seem to be following more and more. Ever since our first confab took the ‘barbed wire route’ a few years back, our uplifting chinwags about how delicious the first earlies were, or how well our toms are doing, have been accompanied by a gathering sense of gloom. It’s not what you’d expect of folk that get such a kick out of growing things – we’re not used to cultivating despondency.

“Survival instincts are eventually going to trump any amount of barbed wire fencing, even if you’ve invested in your own baseball bat to defend your veggies”

The roots of all this ‘barbed wire’ talk reach back to autumn 2000, and the fuel protests, when lorry drivers, farmers and others blockaded UK oil refineries. For a few weeks it sent the country into topsy-turvy mode, as the imminent threat to fuel supplies triggered panic buying at garage forecourts. The effect soon rippled out to shops and supermarkets, with several of the big stores warning that panic buying coupled with fuel shortages meant that there might only be enough food for a few days’ supply. Supermarkets rationed staples like milk and bread. For a few peculiar days, civilisation started to dysfunction. Remember?

This shock to the country’s infrastructure also threatened dire consequences for our health services, postal deliveries, manufacturing, national security, the transport network… but it was those images of supermarket shelves being cleared, amid a primeval feeding frenzy, that started to haunt our chats on the veg plot. All of what ocurred in 2000 was symptomatic of what happens when you start, even gently, to pull the plug on an infrastructure that’s almost totally reliant on an uninterrupted supply of the black stuff – oil. By choking off the supply of fossil fuels like petrol and diesel, a few otherwise fine and upstanding citizens sent shockwaves through a way of life we take, increasingly at our peril, for granted.

“I well remember getting to the killer thought before my friend did: where will people go if the shops ever do run out of food?”

You could almost feel the heat drain from our cups of tea on the day, during one natter on the plot, that we stepped over the line. We asked ourselves: what would have happened if the fuel protests had gone on for weeks, or even months? It makes my palms clammy even now just to write about it.

My friend’s organic kitchen garden is an extensive one, and is an integral part of her smallholding, with cattle, sheep, chickens and geese in the mix – as well as her family. She is a powerhouse of self-reliance, and with much hard work she makes self-sufficiency look doable. Pondering the collapse of everything we take for granted, and amid such abundance, I well remember getting to the killer thought before she did: where will people go if the shops ever do run out of food?

Although we laughed at the time, the answer to my question – that they’d come up the lane in a mob, bash my friend, if she tried to stop them, over the head with a baseball bat, and take what vegetables, fruit and livestock they wanted – has since lost any comedic quality. Whether such a ravenous posse would actually know what to do with (let alone how to kill and prepare) what they’d looted is another story. Autumn 2000 showed that it only takes days for normal and generally rational people to succumb to those base survival instincts that slumber deep in us all. Pushing and shoving in the supermarket aisles is one thing, but what would our psyches be like after weeks or months, stoked by that most powerful motivator, hunger?

“The deep irony is that these real-life pilferers will probably be feasting on some of the most locally grown, chemical-free food they have ever eaten”

The truth is that we live in a society that depends on an oil-addicted infrastructure that’s as critical to the smooth running of everyday life as it is fragile and vulnerable to ‘attack’. The frenzy of 2000 was triggered by a handful of disgruntled, determined citizens – not by a carefully planned terrorist attack on our country’s ‘normal life’ support system. 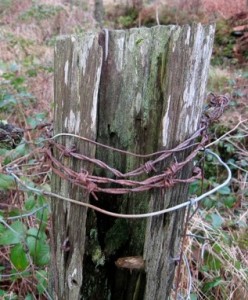 Is it time that those of us growing our own thought about putting barbed wire on our must-get shopping list?

It’s comforting to think that those of us with decent-sized kitchen gardens or allotments might fare pretty well if ‘normal life’ took a dip for a while and our food shops temporarily closed their doors. With a bit of planning and forethought, we could get by without luxuries and even cut back on staples, making the most, depending on the season, of what could be picked either fresh from the garden, or got from the freezer or from store. But it’s also fanciful thinking. Survival instincts are eventually going to trump any amount of barbed wire fencing, even if you’ve invested in your own baseball bat to defend your veggies, and allotments will offer rich pickings for famished mobs, making vandalism seem pale by comparison.

Some of these ‘survival instincts’ are already kicking in; the recession has sown the seeds of endless stories of how produce is being stolen, mostly from allotments, all over the country. This isn’t wanton destruction, it’s the deliberate targeting of entire crops, almost certainly fuelled by the felonious desperation of those struggling to keep up with ever-escalating food prices.

The deep irony is that these real-life pilferers (as well as my fictional, bat-wielding mob) will probably be feasting on some of the most locally grown, chemical-free food they have ever eaten. Although changes are afoot in the way we feed ourselves as a nation, it’s still a fact that for most people, food comes from a long way away, and is conveyed to them via a rumbling, oil-dependent transport network that delivers it ‘just in time’.

With climate change upon us, and the age of cheap, abundant oil drawing to a finale (expert opinion is converging on the consensus that we’ve already hit, or are about to reach, ‘peak oil’, after which reserves will gradually diminish), we face profound changes to the way our oil-drenched lives are shaped.

For kitchen gardeners, ‘food supply chains’ are non-existent. It’s food feet (metres if you insist) for us – but it’s the long, global supply chains, powered by oil, that are the weak links in civilisation as we know it. Luckily, we’re waking up to the realisation that the best way to fend off my bat-wielding mob is to drastically reduce the length (and vulnerability) of those supply chains. 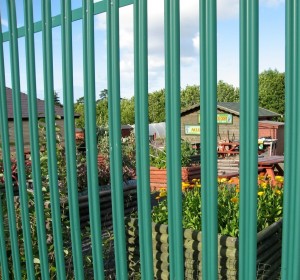 This kind of fencing is designed to deter wanton vandalism, but is it really going to deter those intent on eating what lies behind it once the shops have run dry?

That’s what all the ‘relocalisation’ buzz is about. Bringing food production as close as possible to where it’s consumed is one of the guiding tenets of the work being done by the Transition movement – a global network working to build resilience into communities as we face up to the twin threats of climate change and peak oil, as well as future economic uncertainty. Much Transition work is focused on trying to rebuild the local food networks that used to exist around many of our towns and cities (when ‘local food’ meant local food) in preparation for life in a post-oil, low-carbon world.

Earth-friendly organic gardeners are pretty low-oil gardeners by default. We’re well placed to play our part in rethinking and reshaping our nation’s foodscape, so it can both withstand and quickly bounce back from whatever future shocks or traumas it might encounter. Quite simply, the more of us there are growing as much food as we possibly can, the less likely it is that I’ll wake up clammy from nightmares about baseball bats.

Our gardens and allotments, whatever their size, are making a priceless contribution, not just by cultivating a growing sense of individual self-reliance as we tend them, but also by cultivating resilience itself.