There’s no need to buy solutions to pest problems that nature can solve for us. The only real problem is how to sell this idea.

Minuscule spiders a few millimetres across, little brown orbs with a circular hole in them, and lolloping, hungry lumps of what look, for all the world, like yellowish-grey snot: these are just some of the wannabes auditioning for a new advertising campaign I’m thinking of launching. Do they sound like guaranteed head-turners to you? Is there a chance they’ll sink into your subconscious as brands you’ll never forget? Can you imagine them starring in a full-page advert in your favourite gardening magazine, or on your TV screen, complete with freephone helpline number, web address and a QR code?

Like gardeners of all hues, I always get a bit trigger-happy in my greenhouse around now. I’ve got pot-grown strawberries, tomatoes, peppers and aubergines, a cucumber and a melon, and much besides, all growing away in peat-free splendour. But something else is growing too: aphids. It’s a charmed gardener who doesn’t entertain these tiny greenish insects from time to time; why would any self-respecting sap-sucker forgo the chance to feed on the soft, fleshy plant tissues we’ve been coddling indoors, especially when it’s been so unseasonably chilly out?

“To squish, to squirt or to sit? – that is the question” 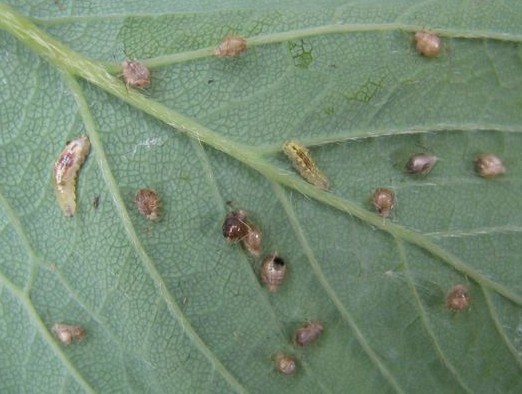 Pest control without a price tag: on a strawberry leaf, lolloping hoverfly larvae hunt around for a meal among the shiny, pale brown shells of aphids hollowed-out by tiny and naturally abundant parasitoid wasps.

I’m never surprised to spot pioneering colonies of aphids feeding on my plants, but they do put me a bit on edge, wondering whether to squish them between finger and thumb, give them a carefully targeted squirt of soft soap – or just sit it out. To squish, to squirt or to sit? – that is the question.

If I’d plumped for squishing, I’d have been in good company. Recently, the lead presenter of TV’s ‘Gardeners’ World’, Monty Don, an unashamedly organic gardener, helped reinvigorate the resurgent and long-overdue debate around pesticide use. He did this not by penning some controversial essay or giving a hard-hitting lecture, but simply by saying, on television, that his only way of dealing with the bright red lily beetle Lilioceris lilii, which munches on lilies and their relatives, is to “hand-pick them and then destroy them”. Who would have imagined that such common-sense advice – squishing relatively large and easy-to-spot bugs, something which costs not a penny and has zero environmental impact – would cook up quite such a storm?

But, with ironically perfect timing – it’s 50 years since Rachel Carson’s classic book on the ecological dangers of synthetic pesticide use, Silent Spring, was published – the multinational pesticide makers threw their arms up in horror at Monty’s earth-friendly advice. They accused the BBC of organic bias, claiming that Monty should have religiously listed all the ‘options’ for tackling lily beetle – even though he has made it very clear, from the outset of his tenure, that he will not be recommending anything he doesn’t do himself, in his own Longmeadow garden.

“Who would have imagined that such common-sense advice as squishing large and easy-to-spot bugs would cook up quite such a storm?”

Some of the most muscular arms going up belonged to  those selling garden pesticide products containing neonicotinoids – the insecticides currently under intense scrutiny because of their suspected links to the declining health of global bee populations. These products, commonly sold in pretty point-and-shoot, landfill-destined plastic bottles, for use on flowers and food crops, cost quite a number of pennies. Manufacturing, transporting and selling them requires energy and resources, chiefly oil; they generate pollution; and they are almost certainly having other detrimental impacts on our environment, in ways we probably don’t even know about yet. These lab-made ‘systemic’ chemicals are those which seep into every cell of a plant, even invading its minute pollen grains and thereby affecting bees and other insects. Imagine Rachel Carson’s incredulity were she here today.

But if there’s one thing that gardening in a more earth-friendly, organic way teaches you, it’s that a hands-off approach often works a treat, so I plumped for sitting it out, complete with contemplative cuppa. And that’s when I spotted the raw talent for my forthcoming advertising campaign.

Sparing the odd escapee parsnip the spring tidy-up will reward you with heads of its yellowish-green flowers which are magnets for adult hoverflies and other beneficial work-for-nothing garden insects that help keep pests in check.

First up was an adult hoverfly, stock-still and soundless in mid-air, checking out my aphid-invaded strawberries. After an initial fly-past, it began laying its tiny, pale pill-shaped eggs among the aphids, one here, one there, but always near the proliferating sap-suckers. How did I orchestrate this spellbinding and humbling method of garden pest control? I just left the greenhouse doors wide open, so that up-for-egg-laying adult hoverflies, refuelling on the nearby nectar-rich flowers of an overlooked parsnip and some early poached egg plant blooms, could fly on in.

While admiring the tiny hoverfly’s eggs I found other, even smaller aphid-eaters already at work. Strung between the strawberry leaves were the unassuming webs of tiny ‘money’ spiders, providing a first line of defence against winged aphids surfing the breeze. Down on the leaf undersides, another diminutive but effective aphid-eater had also beaten the hoverfly to it. This one is dead clever. Barely visible parasitoid wasps lay their eggs inside aphids, and their larvae eat the aphids, unseen, from within. The body of the doomed aphid swells, becoming a pale brown orb, before a new adult wasp emerges from its hollow carcass via a neat, circular hole. It’s nature at its beguiling best.

“There’s only one snag to this approach: doing nothing isn’t a great money-spinner”

The hungry blobs of ‘snot’ appeared a few days after the hoverfly’s visit. Its eggs hatched into larvae that lolloped over the plant, each eventually eating around 50 aphids a day. These, surely, are the iconic stars of truly renewable garden pest control. Within a week or so, my strawberries were nicely cleaned up. And my input to this miniaturised natural spectacle? Not even a squish or a squirt, just sitting back and doing nothing.

There’s only one snag to this approach: doing nothing isn’t a great money-spinner. So when some bloke on the telly advocates a green, chemical- and purchase-free way of dispatching troublesome lily beetles, corporate cages start rattling. If you were spending eye-watering sums on a media advertising blitz, trying to convince gardeners to spend money on something that nature can help us with for free, without harm to the ecosystems we depend on, you might well be rattled.

Out in my greenhouse, my own advertising campaign is taking shape. I’ve got my slick, unforgettable slogans and marketing hype at the ready, and nature is working night and day on iconic brands and seductive images. It could be the most enduring and strictly not-for-profit advertisement campaign that gardening has ever witnessed.

Now, if I could just fathom how to put a QR code on to one of these lumps of snot…