Although plastic pollution is looking like an environmental time bomb, we can help defuse it by actually using more plastic in our gardens.

Should you bump into me while out walking on the North Wales coastline this winter, you’ll probably find me watery-eyed. A cold and biting northerly might be the culprit, but more likely I’ll be shedding a tear of despair. For me, winter’s a bleak time to be taking a walk on a beach anywhere. Despite the lure of an absence of ice cream-slurping hordes, navigating the thin, enchanting strip where land meets sea can be downright depressing – especially if you make the mistake of looking down.

There’s now so much rubbish washed up on our beaches (they don’t get cleaned up outside the tourist season) that I’ve temporarily curtailed my expeditions to gather seaweed for the garden – which I always try to combine with a shopping and recycling trip (earth-friendly organic gardeners are all for multitasking). 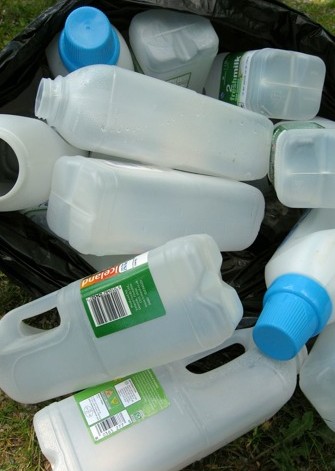 Using plastic bottles and containers such as these (made from High-density polyethyene, or HDPE) can be recycled and live on as useful and durable materials for the garden.

What washes up on our beaches ranges from the mundane – cigarette lighters, toothbrushes, fishing net, you name it – to the unmentionable items found near sewage outlets (and just about anywhere else after heavy rain flushes our overwhelmed drains straight out to sea). But there’s one material that shines out among all this detritus, earning the accolade of king of the crap, and which is found on beaches in every corner of the globe. It’s stuff made from – plus various chunks, bits and fragments of – that amazingly durable and tenacious material: plastic.

I’ve been known, at the end of a seaweed session, to launch a one-man beach clean- up. These get off to a flying start until I’m overwhelmed by the sheer scale of the task. Bouts of virtousness have seen me bagging up plastic milk and drink bottles, and more than a few plastic plant pots, ready for a homeward drop-off at the recycling bank. It’s smelly work, but the feel-good factor is awesome. The only fly in the ointment – and it’s a big one – is that the plastic causing the most serious environmental harm to marine environments isn’t the obvious garbage blighting our coastline, but the stuff we can’t see.

I first learnt of ‘mermaid’s tears’ (PDF file) while reading about the staggering scale of marine plastic pollution. Mermaid’s tears are actually small pellets of plastic that have been broken down from larger objects, then worn down by the relentless tides. Plastics don’t biodegrade, but break down into ever-smaller pieces, and can persist for potentially hundreds of years. They become smooth and rounded – just like fragments of concrete become pebble-like after years of rolling in the shifting sands. These man-made ‘tears’ get gobbled by seabirds and other marine life, and lie undigested in their guts, while some end up being fed, fatally, to seabird chicks.

It gets worse. The spawn of mermaid’s tears, tiny fragments of ‘microplastic’ smaller than the diameter of a human hair, are found in the sand on beaches across the globe. In one UK study, a quarter of the weight of ‘sandy’ particles taken from a beach was microplastic. Scientists have found that these miniscule bits of man-made (and man-dumped) rubbish can act as magnets for chemical toxins found in seawater, such as PCBs and the notorious pesticide DDT; they might also release harmful chemicals themselves. When sea-dwellers such as sand-hoppers, lug worms and barnacles eat and try to digest microplastics, any absorbed chemicals could be liberated, so that when a sand-hopper becomes lunch for a bigger beast, the toxin could move on up the food chain. If they’re eaten by a fish, the next link in the chain (with apologies to vegetarians) could be you.

All this, plus pictures of a ‘soup’ of waste plastic twice the size of the USA swirling in the middle of the Pacific Ocean, got me thinking. I can’t imagine this global rubbish dump doesn’t contain its fair share of plant pots, compost bags, plastic cloches and polytunnel covers amassed from gardeners on all seven continents.

Setting out my recycled paths was a piece of cake. The plastic edging boards soon looked at home next to my drystone walls made of recycled (and real!) Welsh slate.

Earth-friendly gardeners worth their salt do all they can to avoid polluting the world around them – it’s our raison d’etre. However, we rely heavily on plastics (and similar materials like pest-blocking fleece and mesh) to enable us to go about gardening in a more planet-friendly way. You might garden a long way from the sea, but when that polytunnel cover – the one you gave ‘one more year’ to – or an out-in-the-sun-too-long plant tray finally gives up the ghost, turns brittle and shatters into a dizzying number of tiny fragments, many of which fall to the soil, you too become an unwitting microplastic polluter.

Polluting soil with plastic might not be as bad as allowing it to contaminate the delicate balance of marine life, but isn’t the soil a living and finely balanced ecosystem too, and one which we, as gardeners, are reliant upon? It’s heartbreaking enough unearthing bits of colourful plastic (along with glass and metal) when you take on a new garden or allotment, but to think that there might be countless unseen fragments lurking, whose effects are as yet unknown, is deeply unsettling. 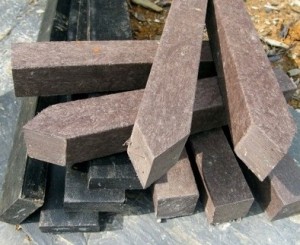 I used recycled black plastic edging boards for my paths, using sturdy brown and wood-textured plastic stakes to fix them in position.

Much as I’d love to bring all those washed-up plastic drinks bottles home and turn them into mini cloches, my garden doesn’t run to several acres. In any case, with all we’re learning about the impact of plastic pollution on the world around us, there’s something counter-intuitive about deliberately increasing the not-inconsiderable presence of plastic in our gardens. But that’s exactly what I’ve decided to do, here on my own earth-friendly patch. It took a low-energy light bulb moment to remind me of one of permaculture’s enduring tenets: the problem is the solution.

Although I can’t find room for all the plastic bottles I could gather from the beach, I can utilise them in another form. Last spring I was ready to start laying out paths and making beds in my evolving terraced garden. I’d mulled over the materials available to edge the beds, initially dimissing using recycled plastic (it just felt unnatural), but I then found myself wavering over using wood. Even if I used an eco-friendly timber preservative, the notorious North Wales rainfall would soon be making serious inroads, and chemical-laced pressure-treated timber was a no-no. In any case, as wood decays, it releases its carbon into the atmosphere. We need to leave trees standing. 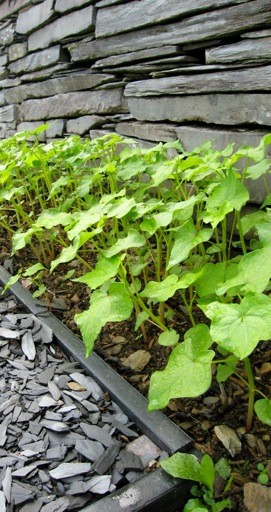 Reclaimed slate chips are used as infill for the paths, complementing the durable and recycled black plastic edging.

One solution to our planet’s growing plastic mountain is to turn waste plastic into something else. Given its unrivalled durability and tenacity, we should ensure that it lives on to a purpose. The recycled plastic I’ve used for my beds and paths (from friendly family firm Filcris) is effectively zero-maintenance. It won’t rot away, shuns even Welsh rain, and might well outlast me. It’s strong, easy to use, and it goes a treat with the 100-year-old slate chips I’ve reclaimed for free from a nearby quarry – a hugely gratifying recycled combo of old and new. And in the future, when a new custodian eventually arrives here and makes changes, with any luck it’ll be possible to feed my path and bed edges back into an even more sophisticated recycling stream.

I know that any plastic I divert from seashore to recycling bank is unlikely to actually end up as path and bed edging in my garden, but that which does is at least serving another useful, productive and non-polluting purpose. Just knowing that might help me, and the real mermaids, not to shed quite so many tears.