Earth-friendly organic gardening has had a drubbing recently in other gardening magazines. What drives the ‘organic bashers’ – a lack of understanding, or the need to keep the chemical companies sweet?

What on earth (apart from treating it with respect) are we doing that’s bugging them so much? Just what’s got their goat, is getting up their noses, and is unleashing such an avalanche of misleading, disingenuous and spurious guff? By ‘they’, I mean the folk responsible for magazine headlines like ‘Organic UK just a myth, says survey’, ‘Can organics make pest problems worse?’, ‘The problem with ‘organic”, ‘Organic Alan [Titchmarsh]: I use weedkiller’, and ‘The row over organic fundamentalism’. Fundamentalists, us?

Just why do mainstream gardening magazines give us earth-friendly organic gardeners such a sustained bashing – and help perpetuate the myth that organic gardeners, celebrity or not, can also use weedkillers?

‘They’ also include the owners of: “There are all kinds of downsides to going entirely organic and I think the effect of organics can be a damn nuisance”; “Organic gardening has been dealt a blow after a shock report revealed the vast majority of gardeners are still happy to splash weedkillers and pesticides around”; “I’ve been organic for 15 years – with one exception. I use Roundup [glyphosate] for clearing new land of weeds”; “… the public are learning that organic growing results in a drop in yield – all very well for the wealthy Westerner, but not so good for the starving”; “Conventional thinking may lead gardeners to assume natural and organic remedies are safer and more eco-friendly than synthetic alternatives”, and “Unlike some rival magazines we do not preach about organics, nor do we publish organic rants aimed at bullying gardeners into ditching chemicals”.

(And yes, ‘organic’ Alan Titchmarsh has admitted to using a potential carcinogen linked to miscarriages, which is lethal to amphibians, is used for controlling weeds in genetically modified crops, and can pollute water supplies. It’s called Roundup. Love or loathe him, Mr T is not an organic gardener.)

So are we the ranting scourge of gardening? In the magazines from which I culled this lot, I read several animated pieces suggesting that unless we reach for garden chemicals forthwith, our plots will disappear under a plague of locusts. We know it’s tosh, but what we really need to know is why growing in an earth-friendly, organic way, focusing on soil care, plant health and careful use of resources, gets these folk quite so worked up.

It could be ignorance. Simple ideas can prove hard to grasp. Working with nature, rather than against it, isn’t rocket science. In a world whipped into a frenzy by complexity, organic gardening’s simple, earth-friendly tenets are bound to unsteady some folk.

It could be disappointment. The transition from chemically addicted, high-energy gardening to an organic, powered-down approach can be bumpy; it takes time and patience to establish the ecosystem that an organic garden ultimately is. The dubious wonders of television have made gardens seem, like so much other stuff, things you just acquire, switch on and expect to work instantly. 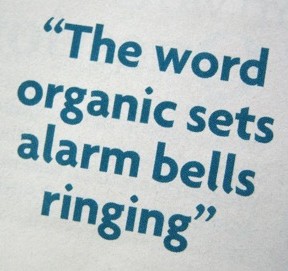 But I’m not convinced these come even close to why we win so much flak. Is reducing environmental pollution, encouraging wildlife, using resources frugally, not being shy of hard work, reducing our ‘carbon footprint’, helping curb climate change, and acknowledging we are part of nature, not its master, really so heinous? Just what drives the organic bashers to try and persuade us to sup from the pesticide chalice, with slippery comments like “I don’t think anybody uses plant protection materials – you notice I don’t use the word ‘chemicals’ – unless they are necessary, as they cost money.” Let’s not forget that these synthetic biocides are designed for one purpose – to kill other species.

Some of the anti-organic crowd profess to be ‘environmentally responsible’. Here’s a corker: “I’m as environmentally responsible as the next person but I don’t label myself as an organic gardener because I still use chemicals if needs be [including glyphosate]. However, I get fed up with non-organic gardeners being labelled as callous individuals, because there are lots of practices organic gardeners adopt that, to my mind, are more cruel than conventional methods.” They then bemoan what a terrible death slugs face after being treated with [safe and natural] nematodes.

There’s a key word in this rant against cruel old organic gardening: conventional. Since when has it been ‘conventional’ to pollute our environment with myriad toxic, alien and often persistent substances, which would never have got there unless we had manufactured them? What’s ‘conventional’ about gardeners having access to the same chemicals that farmers must keep locked away, and for which they must don protective suits, goggles and breathing equipment before even unscrewing the pesticide bottle lid? Is there anything ‘conventional’ about being able to pop out into your garden and fire poisonous chemicals into the air? Good old ‘plant protection materials’, eh.

“In a world whipped into a frenzy by complexity, organic gardening’s simple, earth-friendly tenets are bound to unsteady some folk”

Let’s remember that it’s only been ‘conventional’ to use synthetic garden pesticides and fungicides since the last World War, as they grew as a sideshoot from the so-called ‘agricultural revolution’. Chemical companies found a lucrative market for these ‘plant protection materials’ and they don’t want to let go of it – especially as the UK gardening market’s worth £4 billion. And so we arrive at the nub of things, the point where we must talk about that grubby old stuff, money.

Virtually all magazines need to sell advertising space to be financially viable. Organic Gardening is no exception, but thankfully, uniquely even, its esteemed pages aren’t caught in the same catch-22 as almost every other gardening magazine: the need to sit on the fence, rather than foster honest discussion about the effects of synthesised, unnatural garden chemicals on the world around us. Pro-chemical magazines are stealthier: “…it has always been policy to promote sensible gardening. That’s while you’ll see a mixture of organic and traditional techniques…” Poisoning the planet is ‘traditional’?

Chemical fun? Pesticide Action Network UK’s response to this photograph was: “It could give a misleading impression that Multirose is completely harmless. This product contains myclobutanil, which can cause severe eye irritation, and bifenthrin, a moderately toxic pyrethroid insecticide.

Surely it’s the job of non-specialist gardening magazines to give a balanced, non-partisan view across the whole gardening spectrum? You’ll be hard pressed to find any that fire their pages up with the same enthusiasm for organic bashing as they do, say, in calling for a harmful weedkiller like glyphosate to be withdrawn. If you can find ‘The problem with pesticides’, ‘Can pesticides make pest problems worse?’, or ‘It’s a fair cop: I use weedkiller and I’m not organic’, I’ll eat my organic cotton hat.

They couldn’t run such headlines if they wanted to, such is the clout of the garden chemical industry. If mainstream magazines start looking more holistically at gardening, become more questioning – even critical – about garden chemicals, or about the mighty carbon bootprint of the gardening industry, they risk losing advertising. As the writer Upton Sinclair said, “It is difficult to get a man to understand something when his salary depends upon his not understanding it.”

Yet it’s still curious why organic gardening gets such a sustained drubbing. Or is it. Garden chemical companies need us buying their toxic wares in droves to keep their factories busy. What better way, than to demonise a gentler, proven way of gardening that’s their very antithesis – to cast the only truly ethical and environmentally responsible approach to gardening as the ‘bad guy’. It might fill the pages of magazines in hock to their chemical paymasters, but it’s dishonest and duplicitous.

If advocating a more earth-sensitive way of gardening, if following basic common sense, if being more attuned to the effect of what we do in our gardens has on the world around us, and leading by example, is ‘organic fundamentalism’, then bring it on.

1 Response to Smoke and Mirrors