If you cultivate an enlightened attitude to wild plants instead of trying to constantly eradicate them, your garden can share in their success.

Put ‘kill dandelions’ into a search engine and up flash nigh on half a million ‘hits’. A good chunk of these include advice on exterminating dandelions using chemical weedkillers (especially the worldwide pollutant glyphosate), along with less terminator-style options, such as simply digging them out. Skimming most gardening magazines finds dandelions in starring roles – as shriveling, garden-threatening villains being seen off in yet another slick ‘beware-your-garden-is-under-attack’ weedkiller advert. How did Jack-piss-the-bed – just one of the common names for Taraxacum officinale, in a nod to its kidney-stimulating properties – become the poster plant for a whole industry bent on annihilating wild flowers? 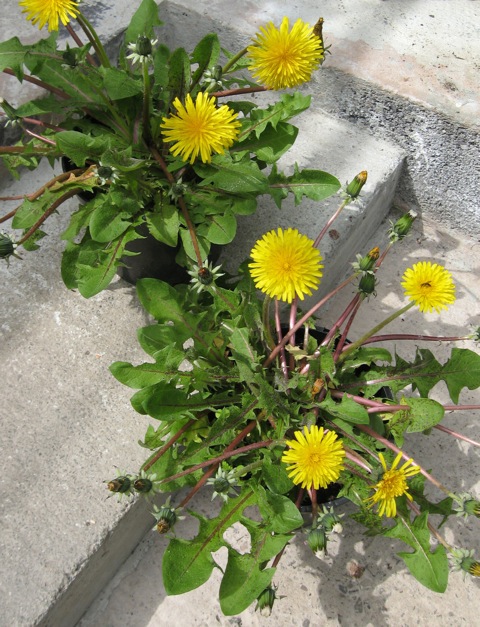 I stand my pots of dandelions near the greenhouse door to entice adult hoverflies, whose larvae feed on aphids.

“How did Jack-piss-the-bed become the poster plant for a whole industry bent on annihilating wild flowers?”

It’s all down to the sheer resilience of tiddle-beds. These wild perennials will grow almost anywhere, sending their thick, tough ‘tap’ roots deep into the soil, down into crevices between paving, and far into gaps in walls. On top of these fleshy, triffid-esque roots sits a neat rosette of leaves which play it close to the ground, well below lawnmower blades. They bounce back from being trampled, and redouble their efforts, Hydra-like, after a beheading with a hoe or spade, regenerating from reserves stored in their gnarled subterranean fingers. Dismembered roots push up new shoots within days.

But here’s the impressive bit: each plant arises from a single seed which might have journeyed for miles on the wind, carried aloft by its miniature, downy parachute. Carefully picking an intact dandelion ‘clock’ – as the pre-takeoff seed-head is called – and blowing the seeds free to tell the time (the number of puffs needed to launch them all gives the hour) brings us simple joy in an e-everything world where nature’s mostly on the telly. My own love and admiration for pissy beds grows stronger every time I see a golden strip of spring blooms curve past me on the roadside. A few weeks on the clocks chime as one, sending parachutes swirling upwards in my car’s tailwind. Some soar high enough to dance among the clouds. 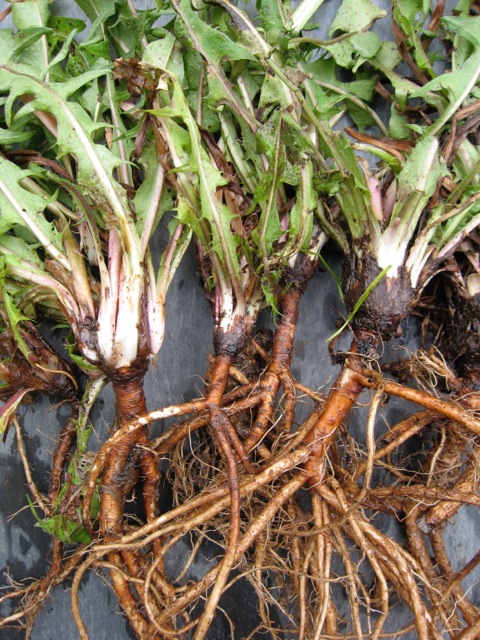 Don’t ditch your dandelions – pot them up.

Much as I marvel at old man’s clock, I’ve decided to tap into one of the dandelion’s less celebrated facets, by potting some plants up. That’s right: I am potting up dandelions. Not poisoning them, not digging and pulling them up, not chopping them off and hoping for the best, not even peeing repeatedly onto those in awkward spots until they fizzle out (although this works a treat), but potting them up.

“I’ve decided to tap into one of the dandelion’s less celebrated facets, by potting some plants up”

There’s a corner of my garden where the soil’s still middling, where wild plants thrive. The wet-a-bed’s grew so lushly here that they shoved other contenders aside, much as they do to grass in a lawn. Ten minutes with the fork (get the tines well down under them) and I’d garnered a couple of fistfuls of leathery roots. They wilted in seconds, so were dunked in a bucket of water while I filled some 6in (15cm) pots with my 50:50 mix of leaf mould and garden compost. I potted five rosettes to each pot (you can trim any long roots, pushing these ‘cuttings’ into the pot as well), watered them in, and watched them sulk for a fortnight. Eventually the shock passed, and they perked up and are growing as happy potted captives. You can do this anytime, and you can sow seeds which don’t make it to the clouds. 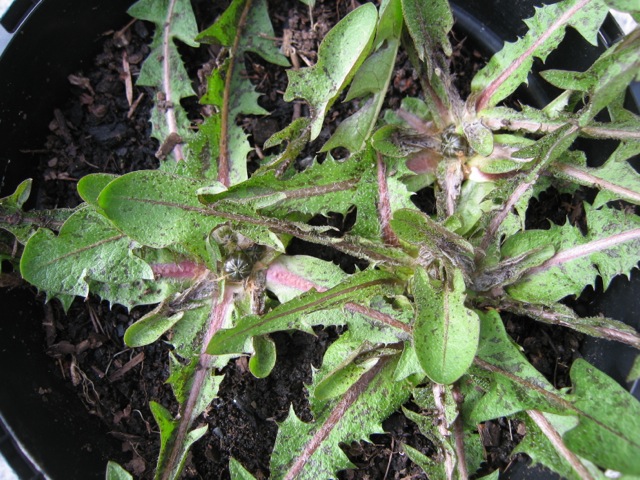 We can feast on dandelions. In the days before winter lettuce varieties took off, they were grown in unheated greenhouses for winter salads. The leaves are rich in vitamins A and C, and are packed with iron; the flowers can be sprinkled on spring salads, and they can be turned into a distinctive wine. Like endive and chicory, young wet-the-bed leaves have a tart, bitter flavour, although you can temper this through blanching, by placing a light-excluding container over the top – which is easy to do when they’re growing in pots. Frying, steaming and pickling also reduce dandelion’s tanginess, while coaxing out its flavour. Even the roots of dog’s posy can be scrubbed up and grated into a salad.

Bear in mind that if you do eat peasant’s clock, its proven diuretic and laxative properties move from the myth that just touching a plant will make you wet the bed, and closer to reality. If you don’t fancy feasting on swine’s snout yourself, whole plants (along with nettles, docks and comfrey) can be brewed up in a bucket of water to make a DIY liquid feed high in plant foods. But much as I do relish their edible output, I’ve actually potted up my dandelions to provide a feast of another sort, one that will send positive ripples across my whole garden, but especially into my greenhouse.

“Each yellow ‘flower’ is actually an assembly of up to 200 short, tubular florets” 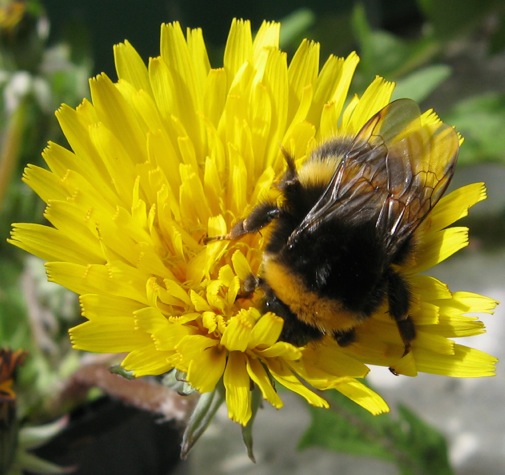 Dandelions are one of the earliest and most abundant of all spring flowers, growing pretty much everywhere, from city centre pavement to rural road verge and field. Each yellow ‘flower’ is actually an assembly of up to 200 short, tubular florets. These abound with nectar and pollen, which the plant guards fiercely by closing its flowers at night, and in dull or wet weather, to keep out dew and rain. As flowers go, short tubes mean rich pickings: honey, bumble (short- and long-tongued) and solitary bees, together with hoverflies, parasitoid wasps, ladybirds, lacewings and many other garden-beneficial insects, all feast with ease on tiddle-beds. Dandelions are among the first wild flowers to open here on warm spring days, when insects jostle for prize pickings. Potting up dandelions brings a moveable burst of airborne life close to where I need it – in my greenhouse.

I already grow autumn-sown pot marigolds (calendula) and poached egg plant (Limnanthes douglasii) in my unheated greenhouse over winter, for their extra-early, insect-attracting blooms. Along with the first flowers on bolting oriental greens, they’re an irresistible lure for insect allies, especially adult hoverflies; these seek out any fledgling aphid colonies mustering on overwintered crops and lay their eggs nearby, to hatch into voracious, aphid-devouring, colony-culling larvae. 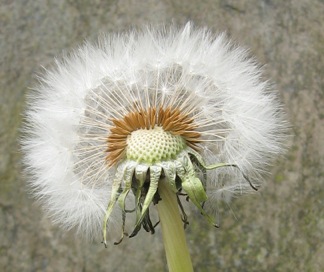 A single brown seed, complete with parachute, can journey for miles on the wind.

“Dandelions are among the first wild flowers to open here on warm spring days, when insects jostle for prize pickings”

My potted blow balls will sit well alongside these other flowers, but their wild nature gives them an added edge. They’ll outperform other flowers in the pollen and nectar stakes, making them especially valuable – stood outdoors on sunny days – to bees of all shapes and sizes. They’ll be in perfect tune with any insects which visit them; some will be the offspring of those which foraged on them this past spring. They’ll be plants of this time, this place, this garden.

Potted dandelions are dead easy to look after. As the flowers fade, nip them off before they turn into clocks (or wait and collect and sow the seeds). In summer, sit them outside in the sun while their roots grow ever fatter, then bring them back into the greenhouse in early winter.

Jack-piss-the-bed is up among gardening’s heroes, not its villains.

1 Response to Potting Up Dandelions