Ahead of the Carbon Curve

You know, I’m sure the worms in my compost bin have got a sense of humour. Now there’s a slight risk that I might be imagining this, but a little while back, after consigning a front page of the Daily Mail to composting nirvana, I’m pretty sure my bin rocked with a chorus of hearty cackles from its segmented annelid inhabitants. 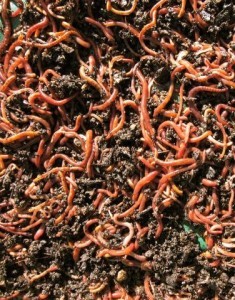 The thrashing worms in my compost bin make short shrift of alarmist newspaper headlines by turning them, literally, into rich, soil-building compost that helps lock up carbon.

They must be laughing a lot of the time – not just when a holed pair of my organic cotton underpants (only the best for my worms) lands in their laps. Each fresh deposit from my compost caddy brings them evidence of our profligate use of resources, as cereal packets, card food packaging, tea bags, scrunched cardboard, envelopes, newspapers, and anything else of organic origin that will (or sometimes won’t) rot away, showers down on these eager compost-creators.

Coverage of even the most fundamental and pressing environmental issues in our tabloid newspapers is, as a rule, given short, superficial shrift; the modus operandi of these publications (apart from being useful composting material) is to provide sensationalist headlines that reassure the great washed that environmental concern equals an attack on their readers’ freedom. One such story had my worms sliding over themselves with bin-rocking laughter.

‘A slop bucket for every home,’ yelled the Daily Mail. ‘Ministers plan to impose fines if you don’t recycle food waste’. Shock, horror. The government is planning to reduce some of the mountain of food waste that goes to landfill each year in the UK, which, when mixed with everything else we bury out of sight and mind, produces, amongst other insidious pollutants, methane, a ‘greenhouse gas’ 20 times more potent than carbon dioxide (CO2). It is currently investigating whether food waste can be collected and steered away from our traditional ‘dump and forget’ waste streams.

As the worms’ laughter subsided and they chewed their way merrily through the words ‘slop bucket’, headlines flashed of an altogether more intelligent but also more disquieting nature: we’re losing 2.2 million tonnes of the UK’s topsoil each year, mostly through erosion by wind and rain. Our emaciated farmland and forest soils, starved of organic matter, are blowing and washing away. A government study has identified the root causes, unsurprisingly, as intensive farming and industrial pollution. This is doubtless mirrored in gardens and allotments across the land; chemical- and fertiliser-addicted gardening knocks the stuffing out of that thin, life-giving layer of brown stuff, in just the same way as feed-the-plants, forget-the-soil farming does.

What’s ringing alarm bells at the Department for Environment, Food and Rural Affairs (DEFRA) is concern over how the UK is going to feed itself in the future. With our agricultural soils in a dire state, the prognosis for increasing the amount of food we grow as a nation isn’t looking too rosy.

Composting rare scraps of food waste and anything with rot-ability has, with a little help from my worms, helped transform my virgin soil, in just a few years, from red, acid and nutrient-less, to dark, crumbly and fertile.

DEFRA estimates that our soils lock away (‘sequester’, in boffin-speak) around 10 billion tonnes of carbon (half of it in peat bogs), with huge potential for it to lock up even more. And just as my worms gave a ripping belch after swallowing the last bits of the Daily Mail, along came another, more deeply worrying headline, this time from the Met Office, alerting us to ‘catastrophic global warming in our lifetimes’.

Scientific estimates have tended to psychologically shunt the effects of severe climate change off into the yet-to-be-lived lives of future generations, but new research from climatologists is bringing us down to earth with a bump. Our fossil fuel-driven lives (which show no sign of abating) could mean that folk alive today might well witness, following a 4C rise in temperature, the loss of up to half of the planet’s species, threats to the fresh water supplies of half the world’s population, and the flooding of low-lying coastal communities. If you plan on being around in 2060, there’s a real chance you’ll witness this planetary fever for yourself.

One increasingly important strand of thought as to how we might still avert climate breakdown (apart from drastically reducing humanity’s CO2 emissions) is to find ways of removing the carbon that’s already there. One of the most effective and easiest ways, as soil scientists will tell you, is to add composted organic matter to the soil, and practice ‘minimum tillage’.

In gardening terms, that means making compost as if our biosphere’s health depended on it, and avoiding the annual ritual of chopping up that precious skin of soil, on which our very existence depends. When you dig soil, you not only turn a fragile ecosystem repeatedly on its head, you expose the soil to the air, which turns organic matter to CO2. This drifts away unseen, helping to turn up the global thermostat. Hold on to your cloth caps, but we are no longer in the age of the spade.

With the bin removed, you can see how composting worms can turn virtually anything with landfill potential into climate-cooling compost. My underpants are in there somewhere…

If the government does go ahead with its plans to collect food waste, I’ll be declining their kind offer of a ‘slop bucket’. On the few occasions that I ‘waste’ food, it goes straight into the compost caddy and then into my compost bin. ‘Slop’ is anathema here, and I’m not big on bins. I have no wheelie bin. Not possessing one of these malodorous icons of our ‘dump and forget’ mentality helps to tune you out of throwaway thinking, and into ‘can I compost it?’ awareness. Only if the worms can’t turn it into energized, soil-building compost, and it can’t be recycled, does any waste get, reluctantly, thrown away. A vegetarian diet will spare you the dilemma of what to do with bones and other stuff – even determined tiger worms find those tough going.

So there’s one alarmist headline sorted: rather than spend zillions foisting a ‘slop collection’ system on a reluctant public, why not show them how to turn their ‘slops’, along with all the garden ‘waste’ (aka valuable resource) that they religiously pack into their brown wheelie bin, into a rich, ultra-local soil food?

Cue the laughing boys. Fast-moving, red and thrashing composting worms will find a bin wherever you put it, and will soon turn all of your garden, kitchen and much household ‘waste’, plus a good deal else (including tabloid newspapers) into rich, worm-worked organic compost. Adding this regularly to your soil will give you healthy, resilient and nutrient-rich crops, and even more importantly, as your soil becomes ever more enriched with organic matter, and remains as undisturbed as possible, it will be able to squirrel away increasing amounts of carbon.

“The soil in our gardens and allotments, if we care for it mindfully, might actually help us do our bit toward staving off climate chaos”

Organic gardeners have been nurturing and improving soil for far longer than forget-the-soil farmers and gardeners have been abusing it, so we can meet government headlines about vanishing soils with a philosophical shrug. But the realisation that the soil in our gardens and allotments, if we care for it mindfully, might actually help us do our bit toward staving off climate chaos, brings added gusto to our determination to garden in not just an earth-friendly way, but in an earth-cooling, climate-calming one, too.

In December, bods from 200 countries will attend the 15th meeting of the parties to the United Nations Framework Convention on Climate Change. The outcome of this mega-meeting will test whether humanity can join hands to avert changes to our climate that will affect every species on earth, from humans to composting worms. Who’d have thought that we organic gardeners would be quite so far ahead of the curve when it comes to cutting carbon.