Found in some lawn weedkillers, the chemical clopyralid is a ticking time bomb – but we could defuse it right now if we learnt from past mistakes.

I had a scare this summer. Halfway up their sticks, my climbing French beans, which I was growing in pots in my greenhouse for early pickings, went awry. Leaves twisted and buckled, veins yellowed and enlarged, and I got a fright: for the first time, I’d been struck by weedkiller residue in my purchased peat-free compost.

A week of tightly-crossed fingers later, the plants got over their brief leaf-curling madness, grew on none the worse, and cropped well. But watching my beans do the twist has roused a nagging fear that I can’t shake off. It comes from knowing that some gardeners, allotmenteers, market gardeners and even growers have already been hit hard by this problem, and that it shows no sign of going away. It’s one that strikes at gardening’s very foundations, and it’s a straightforward one: pollution.

This pollution lurks in animal manure, in seed and potting composts (peat-based and peat-free), in soil improvers and mulches, in green waste compost and, ultimately, in the soil itself. It’s pollution that’s likely to get worse and become increasingly harmful. If you like to maintain a ‘perfect British lawn’ by eliminating any threats to your immaculate sward, you might well be a poisoner yourself. This is pollution that turns one gardener’s choice into another gardener’s tragedy. 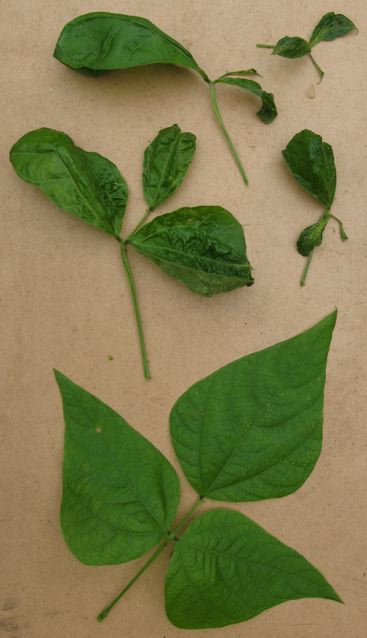 These stunted, twisted leaves with bulging yellow veins on my French beans were my own wake-up call to the dangers of weedkiller residues in potting compost. The ‘normal’ leaf (bottom) shows what unaffected plants should look like.

But this tale of contamination didn’t start out on our lawns, but in heaps of steaming animal manure. Gardeners have used manure to increase the organic matter level of their soil since the year dot. But in 2008, everything changed. A whole range of plants, including aubergines, carrots, courgettes, lettuce, peas and beans, spinach, peppers, potatoes, tomatoes, and even sunflowers and dahlias, started, grotesquely, to warp and contort. Normal plant growth was turned on its head by perhaps the worst bit of man-made pollution ever to blight gardening. As the cause became clear, a name as alien as the substance itself entered gardening-talk: aminopyralid.

Aminopyralid is a synthetic chemical weedkiller which mimics the natural growth hormones found in plants. It is used to kill unwanted broad-leaved plants, such as dandelions, growing in fields of grass (it has never been available for garden use). It works by sending plant cells into frenzied overdrive, resulting in weird, freakish growth and plant death. The chemical enters grass too, but doesn’t kill it. Once inside a plant, aminopyralid binds to the tougher fibrous tissues – the bits which pass (harmlessly, we’re told) through the innards of cattle and horses, becoming the soil-building manna we gardeners crave.

“The new twist in this poisoner’s tale is set not amid toxic muck-heaps, but on our neatly groomed lawns”

The gathering of hay or silage from land sprayed with aminopyralid is what gave this pollutant its legs. It should never have reached our gardens and allotments, but – by disregarding the instruction label – ignorant users ensured that it did, via trailer-loads of muck. Such is its persistence that it can wreak havoc for years to come; when the plant fibres are mixed into soil, the pollutant is slowly released as the fibres rot down (it doesn’t break down in stacked manure). The manufacturers claim it poses no risk to human health.

Following vigorous, gardener-inspired campaigning, the use of aminopyralid was suspended in 2008. Helplines and websites appeared, polluted muck-heaps were magicked away, and practical advice on identifying and dealing with spiked manure was offered to those who had poisoned their gardens with it. Some aminopyralid products were reintroduced in 2010, with tighter ‘stewardship’ measures. Yet some gardens and allotments are still badly affected even today.

This human-made problem hasn’t gone away, and this tale of contamination is now moving to a whole new phase, with potentially even more serious consequences. The new twist in this poisoner’s tale is set not amid toxic muck-heaps, but on our neatly groomed lawns, and it features a chemical with a familiar ring: clopyralid.

Alongside the hype that accompanied aminopyralid’s toxic impacts, another problem has been quietly stirring, not out on our plots, but in the pots, seed trays and growbags in our greenhouses and polytunnels. This problem doesn’t come from farmers’ trailers, but from inside plastic bags. In most cases it probably has little to do with manure, but plenty to do with what goes into our garden waste bins and bags, and lots to do with lessons still not learnt. It’s a problem caused as much by ignorance as by indifference, and it’s one we gardeners are bringing on ourselves. 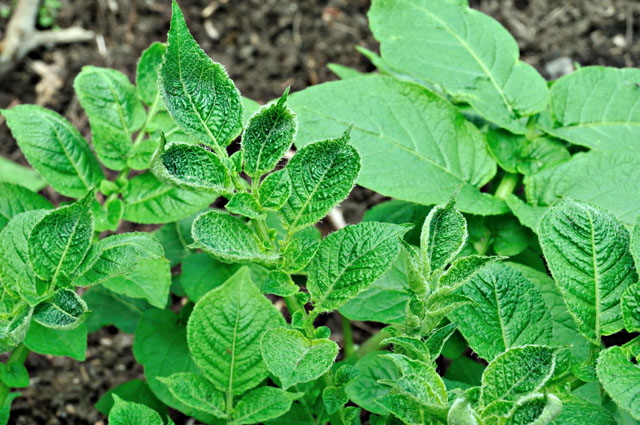 Potatoes are highly sensitive to pollution caused by traces of aminopyralid and clopyralid residue. These plants, growing in soil to which contaminated manure was added, show typical cupping and blister-like leaf damage. © John Mason

Clopyralid, another synthetic chemical weedkiller used to kill broad-leaved weeds among grass, is aminopyralid’s sibling. It works in the same way, and is just as persistent and damaging to the same kinds of plants. The big difference is that clopyralid, an ingredient in some lawn weedkillers, is freely available to gardeners. As well as causing twisted, death-inducing growth in broad-leaved weeds, clopyralid locks on to the grass, loading lawn clippings with pollution potential, which they liberate when they rot. Sensitive plants are damaged by minute traces of clopyralid – as little as 10 parts per billion: roughly one drop in an Olympic-size swimming pool.

Thankfully, little of the garden waste we put into bins or bags for collection now finds its way into landfill; instead it is processed by local authorities and professional compost-makers working to stringent standards. The resulting ‘green waste compost’ can be used in various ways, depending on its quality. Lower-quality material can be used as a general soil improver, while high-quality green waste compost is a key ingredient in peat-reduced and peat-free composts – so the recycling of organic matter helps to reduce peat mining and trim carbon emissions. Some of the best-performing peat-frees I use contain a proportion of expertly composted garden waste.

Although the collection bins and bags of more earth-friendly gardeners tend to see less action – we compost, shred and mulch most of our once-living stuff – the bins of other gardeners are regularly overflowing with garden waste, including lawn clippings. It was North American gardeners, notoriously attached to their resource-guzzling lawns, who learnt a painful lesson in how pollution works after putting their weedkiller-treated lawn mowings, along with other ‘yard debris’ (as they call it), out for collection.

“UK gardeners now have their own ticking bomb”

In 2000, damage almost identical to that caused by aminopyralid was done to garden crops in some states in north-west America. Organic growers, who rely on manure and compost for soil fertility, were also hit, while some compost-makers were closed down. Investigations revealed high concentrations of clopyralid in some animal manure, and in green waste compost made from garden debris, including mowings taken from weedkiller-treated lawns.

Clopyralid residue, slowly breaking down during composting, eventually revealed itself in gardens across the US. The Americans didn’t dally; by 2002 clopyralid use on domestic lawns was ended and a pollution time bomb, driven by the ‘perfect lawn’ fetish, was defused. Cases of contamination have since declined. UK gardeners now have their own ticking bomb, but as yet there’s no sign that we’ve learnt the clopyralid lesson. 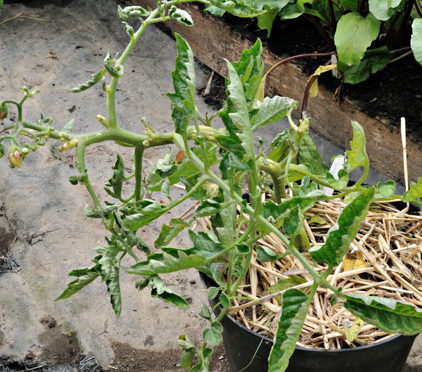 Weedkiller residue damage doesn’t always show up straight away. The new leaves on this young tomato are just starting to show typical ‘curling’ symptoms, as chemical traces in the compost are taken up by the plant. © John Mason

At a recent compost conference, much was made of the ‘danger’ from using green waste compost, and especially of the risks from lawn weedkiller pollution. We saw tomatoes grown in compost containing composted green waste which displayed classic weedkiller damage. The implications were made clear: if raw composting materials, contaminated with weedkiller residues, especially lawn mowings from gardens, enter the ‘composting stream’, the results for gardeners, growers and farmers could be dire. Strangely – and worryingly – not one of the audience of gardeners asked the obvious: if these lawn weedkillers are so damaging, why don’t we stop using them?

Our gardening journalists also appear to be slow learners. Under the predictable headline ‘Binfection’, a tabloid gardening column recently ran a story warning of ‘weedkiller pollution’ in composts and manure. After an absurd analogy with mad cow disease, it suggested that dumping ‘weedkiller-polluted mowings and diseased plant material’ in bins resulted in ‘infected’ compost, and that it’s better to stick with ‘sterile peat or coir-based seed and potting compost’.

Unsurprisingly, there was no mention of aminopyralid or clopyralid, no list of lawn weedkillers containing the latter (so readers could check if they were using a polluting product), and no reminder not to put weedkiller-treated lawn clippings out for collection. There was no suggestion that we might solve this problem at its source, by calling for an end to clopyralid use in our gardens, nor was there a timely mention of how American gardeners learnt the hard way.

What we actually got was the insinuation that green waste compost can’t be trusted and that using peat is safer – hardly surprising for a tabloid newspaper that rails against peat-free compost. Using the human-made problem of polluting weedkiller residues to justify habitat destruction, through mining peat, is reckless beyond belief. It’s the kind of self-serving journalism that, in its own way, is as damaging as the weedkiller itself.

All the signs suggest that we are where American gardeners were back in 2000. We’re sending ever more garden waste for composting, we’re using garden weedkillers containing clopyralid and just trusting that folk won’t put poisoned mowings in with garden waste, and we seem as determined as ever to chase the perfect lawn. We’ve already witnessed, with aminopyralid, the devastating consequences of allowing synthetic, persistent chemicals to pollute the foundations of successful gardening.

Whether we’ll risk a repeat performance, perhaps even more widespread, this time with clopyralid, is down to us.

“In this category, the judges were looking for a journalist who demonstrated a clear understanding of ecological issues, but who was able to communicate that with a spark. The winner was an exemplar in both these respects, questioning industry assumptions and marketing, and driving his arguments forward with rigour. The judges felt that gardeners who read the piece would be influenced by John’s voice for months and years to come.”

Did you enjoy this article? Please consider making a donation to earth-friendly gardener. Even a modest regular amount (£3-£5) helps to meet the ongoing costs of running the site and allows new content to be added for all gardeners to benefit from. You can donate, safely and securely, here. Thank you.