As the new series of Gardeners’ World takes dumbing down to new heights, the most alarming casualty of the rush for ratings is the world around us.

Tempting though it is, I’m going to resist adding my own two-penneth to the near-universal condemnation of the ‘new look’ TV programme Gardeners’ World (GW). Countless others have eloquently captured the decidedly bad mood of our gardening nation: ‘irrelevant to the average gardener’; ‘isn’t it dire?’; ‘condescending’; ‘the whole ethos of the programme is simply boring’; ‘clueless’; ‘trivial, fatuous and glib’; ‘superficial’; ‘toe-curling attempts at being funny’; ‘lightweight’; ‘all the personality of a sheet of wet cardboard’; ‘utter twaddle’; ‘an insult to the intelligence’; ‘patronizing drivel’; ‘disappointed’; ‘gnome overload’; ‘should be dumped on the compost heap’; ‘it was bobbins’. And so it goes on.

I could fill both these pages with similar quotes from various publications and online message boards – and perhaps a rare few actually in favour of the revamped and now hour-long programme. But what’s striking, as well as deeply concerning, about all that’s been said, written and blogged so far (I write this as the fourth episode screens), is how almost no one has picked up on its almost total disconnection from the natural world. The toes of earth-friendly organic gardeners like me haven’t just curled – and upwards at that – they’ve become excruciatingly contorted. 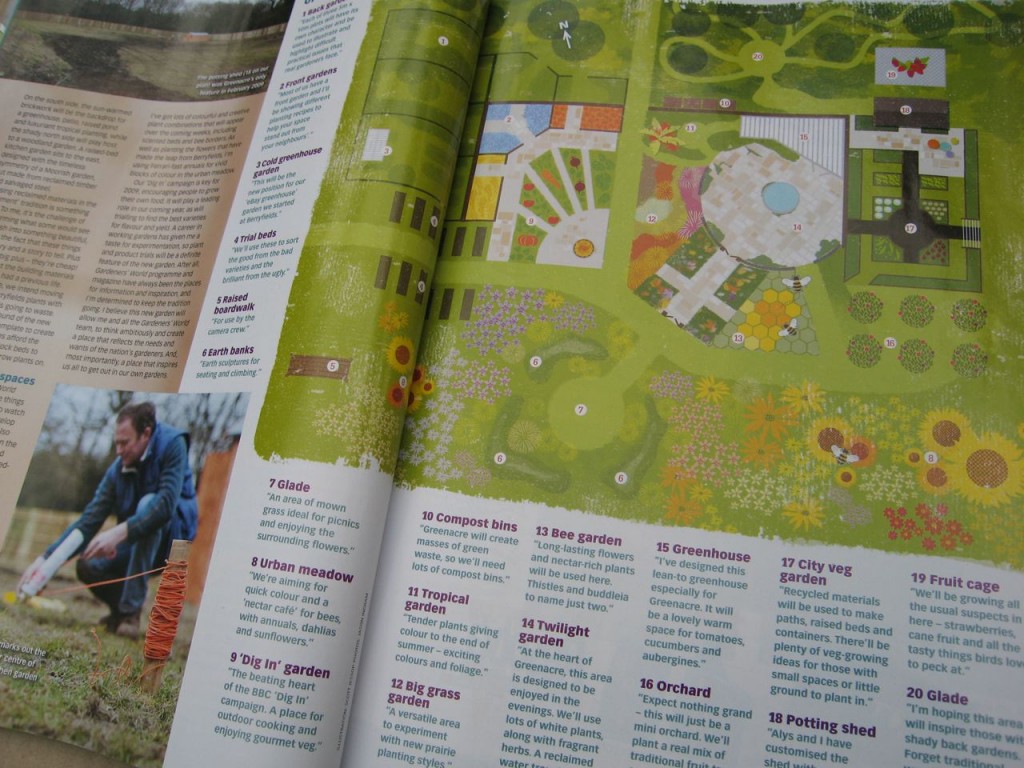 In a fine example of ‘horticultural cleansing’, this article by Toby Buckland, in April 2009’s issue of Gardeners’ World magazine, which introduces the new TV garden, contains not a single mention of earth-friendly organic gardening.

Unless I’ve missed it, the ‘o’ word – ‘organic’ – hasn’t been mentioned once. In a sop to recycling, the potting shed windows have been sourced from some long-flattened football ground, and we’re being offered apparently ‘thrifty’ gardening tips that are, in a nutshell, simply sexed-up and recycled common sense, but whither organic gardening?

From the outset, the new GW has shamelessly displayed its disdain for even a tad of concern for environmental matters. It showed a battalion of diggers mashing the soil of this new TV garden to a pulp, amid a cloud of carbon dioxide-rich exhaust fumes. We then saw dizzying amounts of concrete being used to make footings for the overly tall brick walls which, at first glance, don’t seem to fall under any ‘eco’ remit. The manufacture of cement, a constituent of concrete, contributes five per cent of man-made emissions of carbon dioxide. So far, the tragically named ‘Greenacre’ has, bar the grass, been anything but green.

The earth-friendly viewer’s discomfort will only have been compounded by the large and gorgeous wooden greenhouse, which must have cost a fortune (and quite possibly a bit of the earth – is the timber FSC-certified?). It comes complete with a mains watering system (have they not heard of butts and rainwater harvesting?). This programme’s credibility might be in free fall; its environmental integrity is already in tatters.

You might think, nearing a decade into the 21st century, and given all we know about the pressures our life-giving planetary ecosystem is facing, from resource depletion to climate change, that the team behind and fronting a flagship gardening programme might just summon enough nous to see the future – or at least a glimpse of it – and start joining up a few of the dots.

So what has happened to the ‘o’ word, one used so passionately and persuasively by a distinguished dynasty of past presenters of GW? It would be easy to simply put its disappearance down to the ‘new look’ of the programme, which has all the hallmarks of being aimed mostly at ‘da yoof’, and of the misguided allure of ‘inclusivity’. (Gardening in thoughtful, considerate ways that minimise our impact on the world around us seems pretty inclusive to me.) But it goes deeper than that. 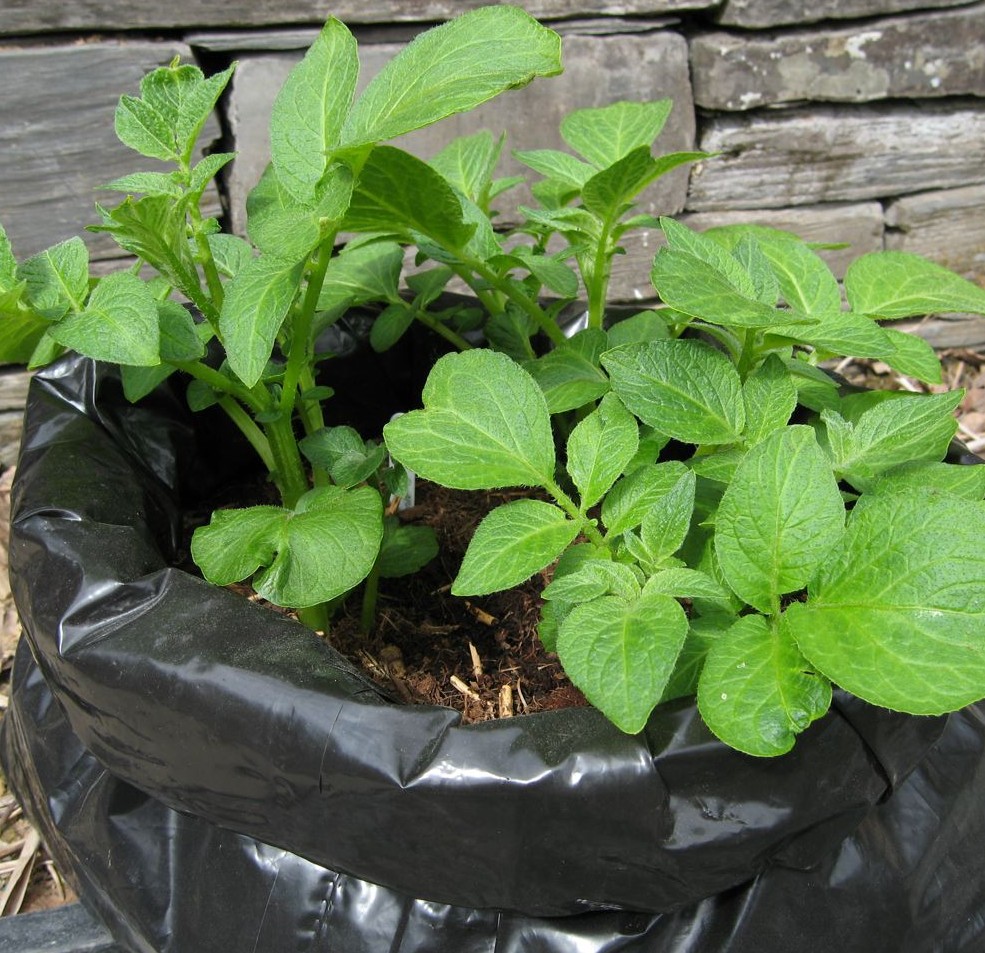 Using an empty compost bag to grow some early ‘Swift’ potatoes in my greenhouse didn’t cost me a penny – and didn’t cost the planet the oil needed to manufacture another overpriced ‘patio bag’.

When the new lead presenter of GW, Toby Buckland, got the job last year, one of his first declarations was that he would ‘support the [gardening] industry’. Now, to support the gardening industry, you only have to fulfil one remit: to get people buying and consuming as much stuff as possible – much of it stuff they probably didn’t and don’t need.

The ethos of gardening organically, of course, turns all of this on its head; we’re trying, by and large, to create vibrant gardens without snaffling up nature’s finite resources as if there were no tomorrow. As organic gardeners we’re also trying to take a prudent, thoughtful approach to the way we garden, shunning the resource-hungry quick fixes that fertilisers and chemicals (and BBC budgets, it seems) bring.

We’re increasingly using our gardens as routes to greater self-reliance, especially when we grow our own food, and as sounding boards to guide us in living more connected, sustainable lives. By gardening organically, we become hard-wired into something beyond the ping of the till at a garden centre checkout; we’re with nature, and boy does it have plenty to teach us.

Teaching – or rather the absence of it – is one of the main bugbears of the new, dumbed-down GW. So far, we’ve had some bad lessons. Blasting water from a hosepipe over a bed of just-planted foxgloves in mid-April is not only unnecessary, it also shows a lack of awareness of just how precious – and finite – fresh, clean drinking-quality water actually is. What would be wrong with watering each plant individually, using water from the garden’s water butts? Though there are pitifully few of those – judging by its size, the greenhouse roof would probably soon fill a 1,500-litre recycled water tank just like mine. 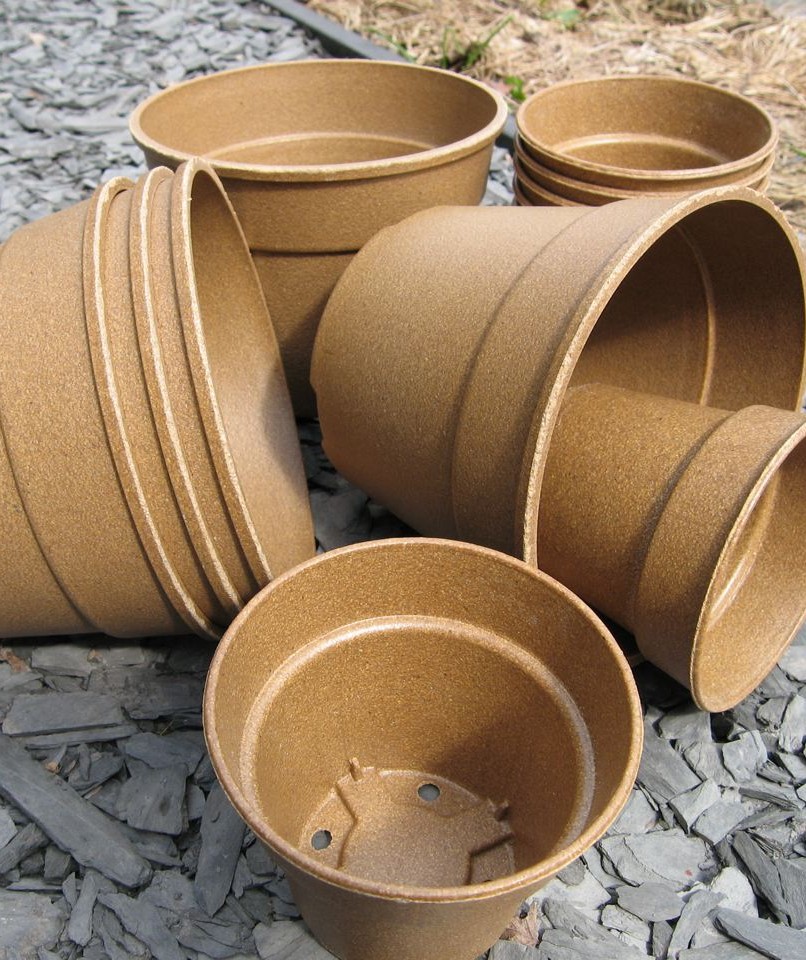 Would it have stretched the presenters of Gardeners’ World to have spent a minute or two explaining how biodegradable pots like these can help reduce gardening’s environmental impact?

Some of those foxgloves were growing in the new biodegradable plant pots (made from straw, rice husks and bamboo), which can be used for several years. At the end of their life you break them up and add them to your compost heap or bin. These pots, which are now widely available, are one small step towards weaning us off oil, which is needed to make the millions of plastic pots we gardeners use each year. Was any of this expounded? No. All we got was, “I’m a fan of those.” Nothing earth-shattering learnt there, then.

My early ‘Swift’ spuds are romping away in an old compost bag turned inside out. GW decided to encourage even more resource-gobbling by growing their spuds in those woven plastic bags with handles, which have been pushed so hard this spring. If you’ve bought those, you’ve been fleeced. It’s a pity the programme’s ‘thrifty’ thread snapped at this point. It could have saved an awful lot of plastic – let alone money.

The great thing about the earth-friendly, organic approach to gardening is that you don’t have to go sticking a label on it. You can explain all of its basic tenets and guiding principles, as well as demonstrate its practicalities, without one utterance of the ‘o’ word. In fact, I’ve often found it easier to engage folk in discussing organic gardening by, well, not mentioning organic gardening at all.

“So far, the tragically named ‘Greenacre’ has, bar the grass, been anything but green”

Explaining how a more earth-centric approach to gardening can actually help to ease environmental burdens might not be ‘sexy’ enough for GW, but it’s a compelling tale that’s completely in tune with our increasing understanding of how the way we garden affects the natural world around us.

There may yet be a glimmer of hope for Gardeners’ World. One area of the new TV garden has been set aside to demonstrate typical ‘back gardens’, and the plots will be used to ‘illustrate and highlight difficult practical issues that real gardeners face’. Would it be too much to ask that one of these plots, contrived as it inevitably will be, is used to explore how it’s possible to garden in ways that don’t cost the earth? Overlook the ‘o’ word if you have to, but don’t strangle its message.

After all, it’s how we’ll all need to be gardening one day. Soon.

1 Response to The Real Gardeners’ World