Resistance is Fertile: How Gardeners Can Help Wave Goodbye to Potato Blight

This summer’s record outbreak of late blight in potatoes has helped shine a light on a quiet but powerful revolution in potato breeding, which aims to banish the disease from our gardens. This is a resistance movement which all gardeners can join.

By John Walker. Published in the Daily Telegraph, 27th October 2012

Playing the blame game requires not only a grasp of the facts, but also an eye on the bigger picture. When the Potato Council – which looks after potato farmers – recently blamed gardeners for this summer’s upsurge in late blight on potatoes, its claim wanted for both.

But the real sting for home spud growers was the council declaring that “…the blight risk is real, and it would be better if people bought healthy, well-produced potatoes… rather than grow their own.” Hackles went up, and the council saw its words turn to mash. 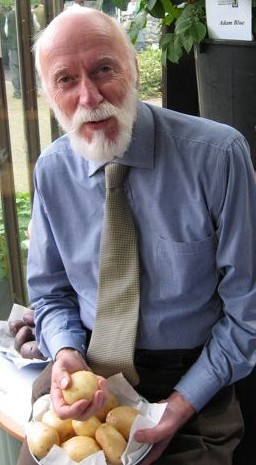 Among the first to respond was Dr David Shaw, research director of the not-for-profit Sárvári Research Trust, in North Wales. There’s not much David doesn’t know about Phytophthora infestans, the microscopic, fungus-like pathogen responsible for late blight on potatoes: he has studied this devastating disease for more than 40 years. For the past decade, David and his team have developed a range of ‘superspuds‘ with the potential to transform how we think about, talk about and tackle potato blight.

“Gardeners grow their own potatoes because they don’t want ‘well-produced potatoes’ that have been sprayed with chemicals,” says David, capturing perfectly the Potato Council’s misjudgment of the mood of our grow-your-own gardening nation.

“Fungicides are usually applied every seven days,” he adds, “but this summer, due to record-breaking wet weather, farmers have had to spray even more often to protect plants. Where the ground has been too waterlogged to get machinery onto it, usually strict spray regimes have faltered and blight has inevitably struck. You can’t blame the weather on gardeners.”

According to David, gardeners are better informed about blight than ever (the Potato Council website even has an informative fact-sheet). He believes most responsible gardeners buy fresh, certified disease-free seed potatoes each year (rather than save some, which can pass on blight the following year).

David is keen to use the ‘don’t grow your own’ hullabaloo to slay some persistent myths: “You hear scare stories about how cut-off blighted potato tops must be burnt or sent in plastic bags to landfill, but you can bury them in your compost heap or bin – the spores don’t survive composting.

“Just don’t leave blighted shoots lying around. It’s also important to get rid of unwanted tubers, either by drowning them in a bucket of water or burying them 60cm (2ft) deep.” 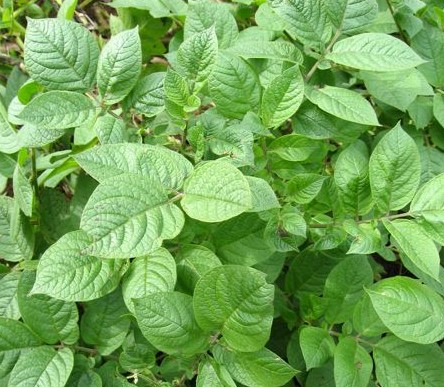 The ‘trip wires’ in these ‘Sárpo Mira’ are holding their own and show barely any sign of infection even during a severe outbreak of late blight.

Tubers which overwinter in the soil or in a compost heap (called ‘volunteers’) are the main way in which blight survives from year to year. Fastidious gardeners tend to root out every last one, lowering the risk of reinfection, but this isn’t the case in fields, as David explains: “Commercial crops are machine-harvested, which always leaves some tubers behind. These can go on to be a potential source of infection for farmers and gardeners. Dumping unwanted potatoes on field margins also stores up trouble, although responsible farmers avoid this.”

Ironically, the chemical sprays available to gardeners to combat potato blight, based on copper, are more toxic than those used by farmers, and must also be applied frequently. All this ‘spray talk’ exasperates David: “The elephant in the room is that farmers and gardeners alike are growing potatoes that are highly blight-prone.

“Even traditionally ‘resistant’ favourites such as ‘Lady Balfour’ can now be susceptible to blight, which is constantly evolving new and aggressive strains.” He is emphatic: “If we grow potato varieties that are genuinely blight-resistant, even moderately so, control will become easier.”

This is why the Sárvári Research Trust is not in the high-energy-input spray business, but the more sustainable, low-input resistance business.

Since 2002 the trust has been developing, using conventional, non-GM breeding techniques, a range of truly blight-resistant potatoes first bred by the Hungarian Sárvári family. These remarkable varieties, known as Sárpos (pronounced ‘sharpo’) are grown by thousands of gardeners who have waved goodbye to blight. There are seven Sárpos available, in red, white and blue, with more on the way (not all have the Sárpo prefix). 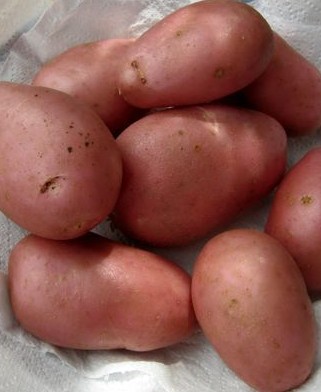 Pink-skinned ‘Sárpo Una’ is a ‘second early’ that can be left to grow on and form long, oval tubers which are ideal for baking.

The secret of their success is their “trip wires”, explains David: “When a blight spore lands on a leaf, the Sárpo variety immediately recognises the threat and fights back by isolating the infection, and stops it from spreading. In susceptible varieties, blight can bypass this system, invade the plant and cause the telltale brown spots and lesions on the leaves and stems.”

“If we grow varieties that are genuinely blight-resistant, even moderately so, control will become easier”

In this, described by David as the ‘worst of the worst’ years for potato blight, the Sárpo has held firm – with not a hint of fungicide in sight.

The first and perhaps most iconic of the Sárpos to reach our gardens is ‘Sárpo Mira’, a red-skinned ‘maincrop’ which crops well even in poor soil, has good slug resistance and stores for months. It’s now the industry benchmark against which other resistant varieties are measured. White-skinned and waxy ‘Kifli’, another maincrop, has good ‘new potato’ flavour, while ‘Blue Danube’ has purple-blue skin surrounding bright, white flesh and is, says David “a brilliant roaster”.

Gardeners have been in the vanguard of growing Sárpo potatoes in the UK, but now they have a unique opportunity to help bring the next of these blight-busting ‘superspuds’ to our plots.

“Being a small non-profit organisation, we’re looking for innovative ways to help raise funds so we can put promising new Sárpos through all the costly hoops involved before we can begin supplying them,” says David.

“We have launched a ‘crowd-fund’ project where gardeners can chip in and help us. In return they’ll receive some trial tubers of a new and unnamed but tasty salad variety to grow, and be invited to a special potato day held next spring. “The feedback from our spud-loving crowd will be priceless.”

Backers can donate as little as £10 to become a ‘friend’, up to £500 to be a ‘go-getter’, with a scale of perks in between. “Our Sárpos originate from a dedicated family effort,” says David, “so involving gardeners and others directly in our ongoing work is an invitation to become part of a much bigger ‘potato family’.”

• The full Sárpo range is available via mail order from Thompson & Morgan; some varieties are available from garden centres

1 Response to Resistance is Fertile: How Gardeners Can Help Wave Goodbye to Potato Blight