Gardening on the Road

Our growing mania for having ‘one click’ gardens delivered in boxes is adding to the mounting pressures on the increasingly fragile world around us. 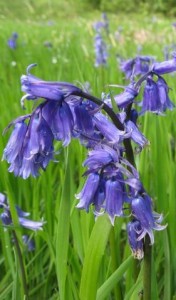 There’s quite a singalong going on outside my window as I write this. The willow warblers, who’ve recently arrived back in the wood from warmer climes, are singing their hearts out, preluding spring with the simplest of serenades. Backing vocals include the soothing hum of bees foraging on willow catkins and the mere trickle of the rain-starved stream. After the long winter, laggard bluebells and marsh marigolds are finally stirring, chivvied by the feathered choir to get their skates on.

But there are other, more intrusive sounds too, which interrupt and occasionally drown out this most gentle of nature’s compositions. The man-made cacophony ranges from the unsilenced boom of a motorbike exhaust to a juggernaut’s ground-shaking rumble and the dull humdrum of cars. And there’s another: the desperate, foot-to-the floor whoosh as countless ‘home delivery’ vans flash by.

The road across the field from me is fast becoming one of the main arteries of a society that increasingly wants everything to be delivered, and often expects it to arrive within hours of the click of a computer mouse (think groceries). We gardeners, it seems, are no exception, and increasingly share this voracious appetite for stuff to be dropped on our doorsteps. Everywhere I turn I’m implored to buy: TV shopping channels hard-sell gardening goodies (as well as some dodgy stuff), I’m bombarded daily with junk emails pushing the latest ‘stunning’ offers, and a relentless stream of plastic-wrapped catalogues flows through my letterbox. ‘Limited availability – ring now!’ ‘Exclusive!’ ‘Call this number to jump the queue!’ ‘One click and you’re done!’ 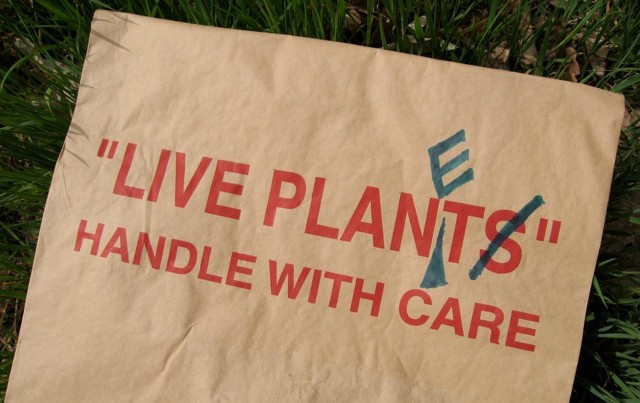 Perhaps it’s time to start going easy on the order form and give some thought to the impact that mail order buying has on the world around us.

You might think it is progress to have everything delivered at a click – the consumer society dream incarnate – but do we gardeners really want or need to go down this road? Have we become so caught up in all this bargain hunting, so hooked on instant gratification, so reliant on our gardens arriving in a cardboard box, that we’ve somehow lost the real gardening plot?

Don’t get me wrong; I love receiving stuff in the post. And by ‘the post’ I mean delivered by Royal Mail and Parcelforce – you know, those reliable red vans whose drivers know exactly where everyone lives and who unfailingly deliver, come rain or shine. I can’t deny the enduring thrill that comes with opening a seed order, or a box of vegetable plug plants, or a fruit tree in a big cardboard box. But I am beginning to wonder whether it’s time we took our foot off the 24/7 gardening-through-the-letterbox pedal and pondered its implications for the world beyond our own garden fences, and for the willow warblers outside my window.

Three experiences this spring have rather dented my love of waiting for the arrival of the postie. The first is the tortuous tale of my seed potatoes. Unable to get the varieties I wanted locally and in those handy five-tuber packs, I ordered online from a well-known mail order company. They were destined for growing in large pots under cover as ‘ultra-earlies’, so imagine my growing frustration when they took over a month to arrive; they should have been starting into leaf when I finally opened the box. And what a job it was to rescue them from the delivery system. Countless emails and, eventually, phone calls and effusive apologies later, the road-weary box arrived, its contents miraculously intact. Who got the ‘we tried to deliver’ cards through their door I don’t know, but it wasn’t me.

The mistake I made (apart from having a prat-nav-unfriendly address) is that I didn’t check how the order would be sent – but you can’t always do that with online ordering, and so my tatties disappeared into delivery limbo. If one of those trusty red vans had got the job, I would have had them within days. I wonder how many times that box whizzed by on the main road, burning fuel, and how much time and energy (and electricity) was expended in exchanging emails, and in phone calls between me and the supplier, and between the supplier and its delivery company. 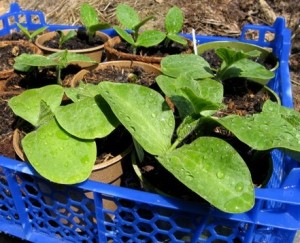 Are we becoming so disconnected from the basic tenet of ‘grow your own’ and so addicted to the deliverable that we can’t even be bothered to fill a few pots with peat-free compost and sow some seeds?

My second dent of faith in buying by post came when another well-known company came under fire for selling carrots as plug plants. Nothing wrong with that, you might think, but the cost of these carrots, with postage and packing, worked out at the mind-boggling sum of over £1 per plant. Even the company flogging them admitted they were poor value for money and quickly withdrew them.

But that whole rumpus missed the point. What on earth are we doing growing carrots, a root crop, possibly in big heated greenhouses, in plugs of compost, then packaging them up and sending them flying around the polluting, fuel-guzzling motorway network? Have we become so distanced from what earth-friendly kitchen gardening is fundamentally about – sowing seeds in soil – that we’re happy to encourage ever more gobbling of finite resources, because we can no longer be bothered to open a seed packet? Do we really think that just because everything else in life is now ‘deliverable’, gardening is too? The folk flogging this kind of stuff were predictably indignant, saying that they were ‘only meeting demand from gardeners’. When did anyone last ask you if you wanted carrots by post at £1 a pop?

The third dent is the deepest. One of the current obsessions in my part of North Wales is with ‘road improvement’, which mostly consists of removing any annoying bends and making roads wider and therefore more ‘efficient’ (shorthand, almost invariably, for faster and more accident-prone). Nothing stands in the way of such ‘improvements’, be it mighty trees, streams, bluebells, rock outcrops or willow warblers; the motorbike, car, coach, juggernaut and, of course, delivery van win every time. As our lives and our gardens become ever more deliverable, nothing must be allowed to hold them up.

In a few month’s time this former bit of mixed woodland will be bulldozed to become yet another part of a ‘racetrack’ along which our gardening-in-a-box will hurtle.

It’s a deeply painful dent, too. Not many miles from where I live, on the same main road that noisily overwhelms my songsters, an ‘improvement’ scheme is underway. The first step was to take a chainsaw to the willow, ash and other trees rooted in the path of progress; decades of steady growth and wildlife-rich habitat were gone in hours. Next, each weeping stump needed only a few mechanised moments to wrench it from a lush green carpet of wild garlic, which will soon be lost, together with bluebells and marsh marigolds, under hardcore.

“Have we become so reliant on our gardens arriving in a cardboard box, that we’ve somehow lost the real gardening plot?”

There will be no more of nature’s spring serenades from the high branches of that bit of woodland; it’s gone forever. Some of the willow warblers lulling me now might even be its evictees. I imagined they were singing in celebration of the sheer joy of spring, but listening more carefully, it could well be a lament.

But not to worry; with the bends nicely smoothed out, all those haring vans – assuming they know where they’re going – will now be able to get our gardens to our doorsteps that bit quicker.