Organics on the Edge

On a visit to Hough Garden, near Alderley Edge in Cheshire, I discover a decorative organic kitchen garden infused with lessons from nature.

By John Walker. Published in The Garden, September 2009.

Countless cups of tea, careful observation of nature and copious mental and written notes may not seem the obvious way to create a thriving organic kitchen garden, but it works for Peter Woollam. ‘I spend a lot of time sitting in the garden, watching what happens. I then try out new ways of doing things, so the garden’s constantly changing. I like it that way,’ he says. 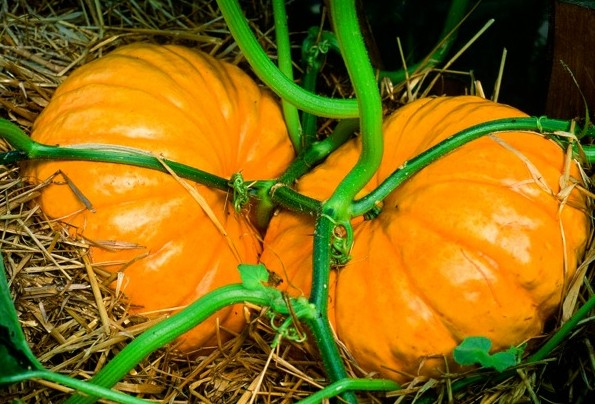 Pumpkins excel at Hough Garden and are one of the first crops to benefit from Peter’s impressive compost heaps.

Entering Hough Garden, just off Hough Lane, on the lower slopes of Alderley Edge in Cheshire, there is an immediate sense that this garden is lovingly tended and in harmony with nature. You soon realise that Peter is completely in tune with both his garden and the natural world around him. His quiet passion for organic growing is infectious, and he is quick to point out the single most important factor in creating an organic garden: mix everything up.

‘If a self-sown plant comes up I leave it. I have self-seeders everywhere, especially annuals like borage that attract bees and other beneficial insects. I haven’t sown pot marigolds for years.’

The garden has a deeply personal history for Peter, the third generation of the Woollam family to display a passion for horticulture. The black-and-white timbered cottage beyond the hedge is where he was born and lived for many years with his parents. Although his birthplace is now in other hands, he kept a gently sloping area of about 2,000sq m (½ acre) which over nearly two decades he has gradually made into his organic paradise.

“Being here all day I see how the garden changes hour by hour, and I watch and learn from the patterns of the various wildlife”

Originally, vegetables were grown much nearer the cottage and the rest of the area was down to grass. Peter, who gave up the hi-tech world of computing to spend more time with his garden, began work on the current plot in 1990 with two large vegetable beds. At the latest count there were 19, criss-crossed by interlocking, neatly-mown grass paths. Beyond the kitchen garden, Peter is developing a more wild, experimental permaculture-cum-forest garden area. 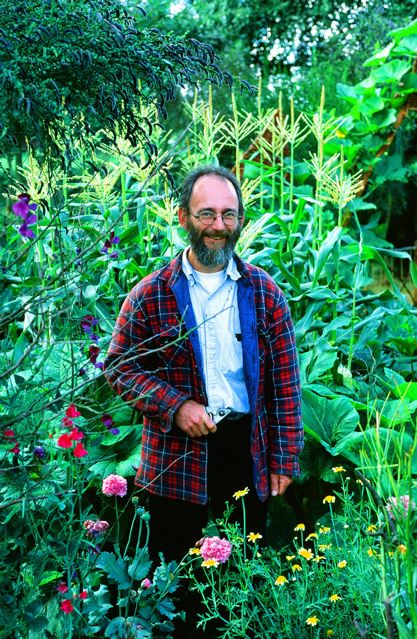 Peter’s home is five miles away, in Macclesfield, where a heated glasshouse is used for plant raising. Most plants are grown in modules, so Peter can ‘pop them in as soon as a gap appears’. The glasshouses at Hough are not heated, but are used to coax and stretch the growing season as much as possible.

During spring and summer Peter spends virtually every day tending the garden, rarely arriving home before 11pm in summer. ‘Being here all day I see how the garden changes hour by hour, and I watch and learn from the patterns of the various wildlife,’ he says.

The garden is a stark contrast with a neighbouring field, in which crops are regularly sprayed. Fortunately, the slope of Alderley Edge tends to divert any spray drift away from the garden, which is kept free of synthetic chemicals. ‘I was gardening without chemicals long before it became popular,’ says Peter.

Beyond the adjacent monoculture lies the heavily-wooded spine of the Edge, which is a mixed blessing. While Peter tries to attract birds such as blue tits, which feed on aphids and caterpillars, others are less welcome in the garden. ‘Jays are a nightmare for peas. They can strip a row in an afternoon, although they don’t like the purple-podded selections such as ‘Stephens’, from Garden Organic’s Heritage Seed Library.’

Peter’s penchant for willow weaving is evident everywhere; most beds are edged with interlocking 30cm (12in) tall semicircles of willow twigs, which stop pigeons walking onto the beds from the paths. ‘I don’t like using nets, which deters smaller birds that feed on pests,’ he says, ‘so I push thin sticks in among susceptible plants, which scares the pigeons off as they try to land.’

Getting organic matter into the fast-draining, sandy soil was a big priority when Peter started out, as there is no mains water. Initially, he used manure directly to build fertility and, until recently, used a system of ‘mobile’ compost heaps, along with garden waste and potash-rich bracken.

Peter rarely digs, preferring to let nature do the hard work. ‘I spread rotted compost or manure over the soil, let the birds scratch it over, then fork it in. If it is left on the surface it harbours slugs.’

“I push thin sticks in among susceptible plants, which scares the pigeons off as they try to land”

Digging is restricted to preparing a trench for runner beans, or incorporating organic matter deeper into the soil. Green manures play an increasing role in maintaining fertility, while regular feeds with home-grown comfrey liquid keeps plants growing strongly through summer.

Peter aims to harvest fresh produce every day of the year. He does not freeze or pickle, so all his vegetables, fruit and herbs come straight from the garden or from storage, although he is partial to some home-made strawberry jam. 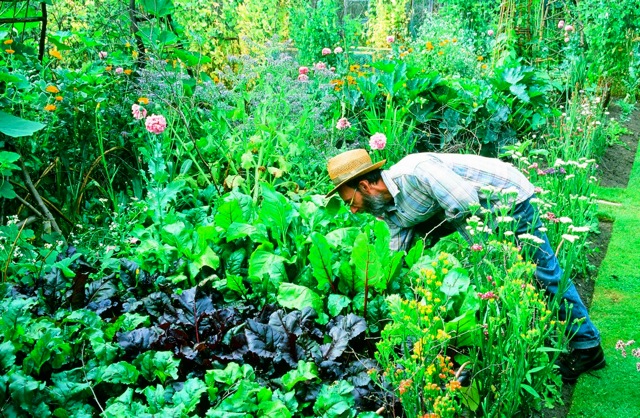 ‘Mix everything up’ is Peter’s motto, which he practices throughout his beautiful and abundant kitchen garden.

Among his favourite vegetables are Siberian kale ‘Red Russian’ (syn. ‘Ragged Jack’), which survives -15°C (5°F) and can be harvested as soon as it thaws, and white beetroot, which is sweet tasting and can be cooked along with other vegetables.

Peter has abandoned growing Brussels sprouts due to club root disease, instead preferring to grow the club root-resistant cabbage F1 ‘Kilaxy’, a round-headed, late-summer/autumn maturer, which brings an eye-catching touch of dark blue-green to Hough’s eclectic beds. ‘These resistant cultivars do work – I actually won first prize at my local show for one of the biggest cabbages I’ve ever grown,’ says Peter.

Crop rotation is essential to keep soil diseases in check, and is made easier by having the garden laid out as a series of beds. Detailed records and a watchful eye mean crops are rarely lost to pests.

The most striking elements of the garden are its unique, mostly willow structures, which are both attractive and functional summer features. They add height, drama, fun and make great supports for crops. For example, a large pyramidal teepee, made from hazel poles, and spanning one of the garden’s criss-crossing mown-grass paths, gives heavy yields of a climbing drying bean, which can twine upwards of 4.5m (15ft).

‘I take the structures down in winter and store them dry, as it doubles their life span. Their form varies from year to year,’ says Peter. ‘I like to have an ever-changing scene in the garden rather than permanent structures.’ Large, striking plants that complement the structures in the garden – such as sunflowers and angelica – are among Peter’s favourites. ‘Anything which grows massive in a year is just brilliant.’

‘Brilliant’ is just one of the words on the air, amid gasps of palpable delight, during one of the early-August open days held here, which regularly attract hundreds of utterly enchanted visitors.

From plenty of late summer nights, plus a deep understanding of how nature does things, has emerged a personal, beautiful and highly productive kitchen garden. Watching Peter go quietly about his business, buzzards wheeling over-head on the breeze, it is as if he is part of his garden.

2 Responses to Organics on the Edge