As concern grows over the pollution of drinking water by metaldehyde slug pellets, what role are pellet-happy gardeners playing, and why aren’t our gardening media mentioning it?

What’s a quick way of contaminating 10,000 litres (2,200 gallons) of water so that it breaches UK and EU legal standards for pesticide residues in drinking water? Pop in a slug pellet*, of course. In gardening lingo, that’s 50 water butts each holding 200 litres (44 gallons), or about 1,100 full nine-litre (two-gallon) watering cans. It’s a lot of water – and it’s but a drop in a potentially contaminated ocean.

Last summer, the pages of gardening magazines, internet sites and blogs, radio and TV gardening programmes, even the national news channels, were abuzz with reports about ‘contaminated’ manure. This media frenzy was triggered when we kitchen gardeners found our crops starting to twist and buckle, as growth turned thin, pale and distorted. The culprit was soon tracked down to be the residue of the hormone weedkiller aminopyralid, which had bound itself to the grass, hay and silage eaten by cattle and horses, and which had survived their legendary digestive processes. 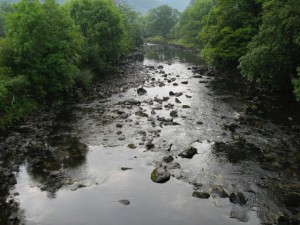 Metaldehyde pollution has been found in ‘raw’ river water, which eventually makes its way to your tap, since 2007, when improved water analysis started to spot it.

A torrent of advice on dealing with contaminated (shall we be honest and call it polluted?) manure spewed forth. Aminopyralid was (and still is) suspended from use, and all soon seemed well with the world. We were assured that any lingering residues would be broken down by bacteria.

“As blue pellets rain down across the land, gardening writers, news editors and broadcasters stay stum”

Apologies to those without internet access, but if you Google ‘contaminated manure’, a whole raft of links to sites offering advice on what to do with a heap of malign manure pops up. Curiously, no one appears to have mooted the idea of making Dow AgroSciences, who make aminopyralid, accountable for the damage to our crops.

Google ‘slug pellet contamination’ and you get another long list of reports of how metaldehyde, the ‘active ingredient’ in the majority of slug pellets, has, in the last few years, been detected in ‘raw’ water that’s extracted for purification into drinking water. (An active ingredient, by the way, is the bit of a garden chemical cocktail that does the killing.) So yes, potentially, there’s metaldehyde in your cup of tea.

“So yes, potentially, there’s metaldehyde in your cup of tea”

The striking thing about this search result is that there’s not even a flicker of interest from the gardening world. No gardening publications, on- or offline, have, as far as an internet trawl reveals, picked up on it. You might think that the pollution of drinking water, with a toxic chemical that millions of gardeners pepper their plots with, would create at least a little interest. Not a bit of it; as blue pellets rain down across the land, gardening writers, news editors and broadcasters stay stum. 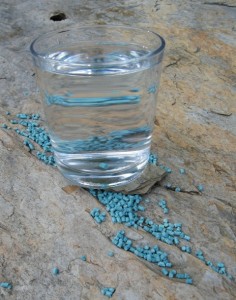 Pollution caused by a single metaldehyde slug pellet can take the equivalent of fifty 200-litre water butts beyond national and European standards for drinking water quality.

Metaldehyde, according to the UK Pesticides Action Network, is ‘highly toxic by inhalation, moderately toxic by ingestion and slightly toxic by dermal [skin] absorption’. The World Health Organisation classifies it as being ‘moderately hazardous’, and the US Environmental Protection Agency identifies it as having ‘suggestive evidence of carcinogenic potential’. It can also kill cats, dogs and wildlife that eat it, or that eat any metaldehyde-poisoned slugs and snails. But there’s plenty more to worry about.

New analytical techniques have shown levels of metaldehyde pollution in ‘raw’ river and reservoir water, mostly across southern England and mostly during autumn, that are above EU and UK standards for pesticide residues and have, according to one water consultant, “significantly exceeded the [legal] drinking water limit in many rivers”. The Health Protection Agency says there is no reason to expect any ‘adverse effects’ on human health, even though metaldehyde can’t be removed during water treatment processes. That’ll be reassuring when you next put the kettle on.

So where has this on-tap pollution actually come from? The problem is caused, apparently, by poor farming practice, which allows slug pellets to enter ditches, streams and watercourses. Each year farmers scatter up to 10,000 tonnes of pellets, and it would be easy to lay the blame at the farmers’ door. It sounds a lot, 10,000 tonnes – surely the quantity used by gardeners is tiny in comparison?

I asked two garden chemical companies selling metaldehyde pellets if they could tell me their annual sales. Unsurprisingly, the information is deemed ‘commercially sensitive’. I also drew a blank with the Horticultural Trades Association (HTA), which represents the UK gardening industry – they said to ask the manufacturers. These companies know exactly how many pellets they’re pumping out, but getting them to fess up is like pulling slugs’ teeth. 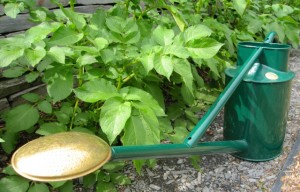 A single metaldehyde slug pellet can pollute an amount of water equivalent to 1,100 nine-litre watering cans.

So let’s do the maths. The HTA tells us there are 20 million gardeners in the UK. The majority of these are probably using metaldehyde pellets, which are available in garden centres in 700g and 800g packs (some are even bigger). Let’s say, very conservatively, that 10 million gardeners each bought one 700g pack. That’s seven million kilograms – or 7,000 tonnes – of pellets potentially being spread over our gardens and allotments each year. (The pellets sold to gardeners contain between 1.5 and 3 per cent active ingredient – so that means that between 105 and 210 tonnes of actual poison could be being spread by gardeners each year. Agricultural pellets contain between 1.5 and 5 per cent active ingredient.)

“That’s seven million kilograms – or 7,000 tonnes – of pellets potentially being spread over our gardens and allotments each year”

Of course a 700g pack might last more than a growing season, but did folk hold back during our last two summers? If my 10 million is an underestimate, it’s possible that in a perfect storm of a wet summer, ignorance, and not reading the instructions, gardeners could be putting considerably more metaldehyde into our ecosystem, and potentially into our water supply.

A ‘golden rule’ of agricultural pellet use is to avoid scattering them within 5m of a ditch or stream. As most of us garden in towns and cities it’s naive to think that blue pellets aren’t finding their way into our drainage systems, and hence into the rivers running through where we live. What happens when there’s a thundery downpour – or even a flood? And allotment gardeners aren’t off the hook; even if there are no drains around, water percolates through the soil, heading somewhere. 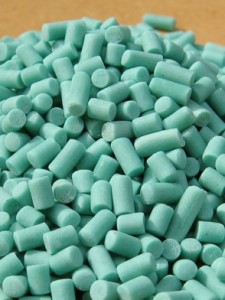 Using slug pellets made from iron and phosphate won’t harm wildlife, and their residue won’t end up in your cup of tea.

Whether you’re an earth-friendly organic type or not, there’s actually no need to mess with metaldehyde. Slug pellets made from iron and phosphate are proving equally effective, even for farmers. They’re blue, too, but they break down into the plant foods iron and phosphorus, they’re not poisonous to pets or wildlife, and they don’t pollute our water. They also have the advantage that slugs crawl away to die, rather than, as with metaldehyde, being killed on the spot, which could tempt a passing thrush.

When our crops curled and twisted last summer, it was a highly visible, newsworthy event affecting a relatively small number of gardeners, and was probably overhyped. But when traces of a toxic chemical found in perhaps the most widely used garden pesticide start turning up in the tap water of potentially millions of people, there’s no hype at all. I guess our gardening media just can’t see that kind of pollution. Or don’t want to.

*Based on a single agricultural metaldehyde slug pellet containing 5 per cent active ingredient.

Note: A correction to this article was published in the November 2009 issue of Kitchen Garden. This clarified the figures quoted in the original article. It is the amended figures that appear here.