Exceptional resistance to late potato blight and virus diseases, high yields, even in poor soils, weed-smothering tops (haulms), drought resistance, and a long storage period. What more could you ask of the humble spud?

The breeding and development of the Sárpo (Sárvári + potato, pronounced ‘sharpo’) varieties is perhaps the most recent example of how research in commercial crops has brought huge knock-on benefits for gardeners, allotment holders and smallholders.

Commercial growers have been slow to appreciate the benefits of the Sárpos, but following the recent ‘Food for the Future’ security assessment, launched by the Department for Environment, Food and Rural Affairs, this looks set to change. 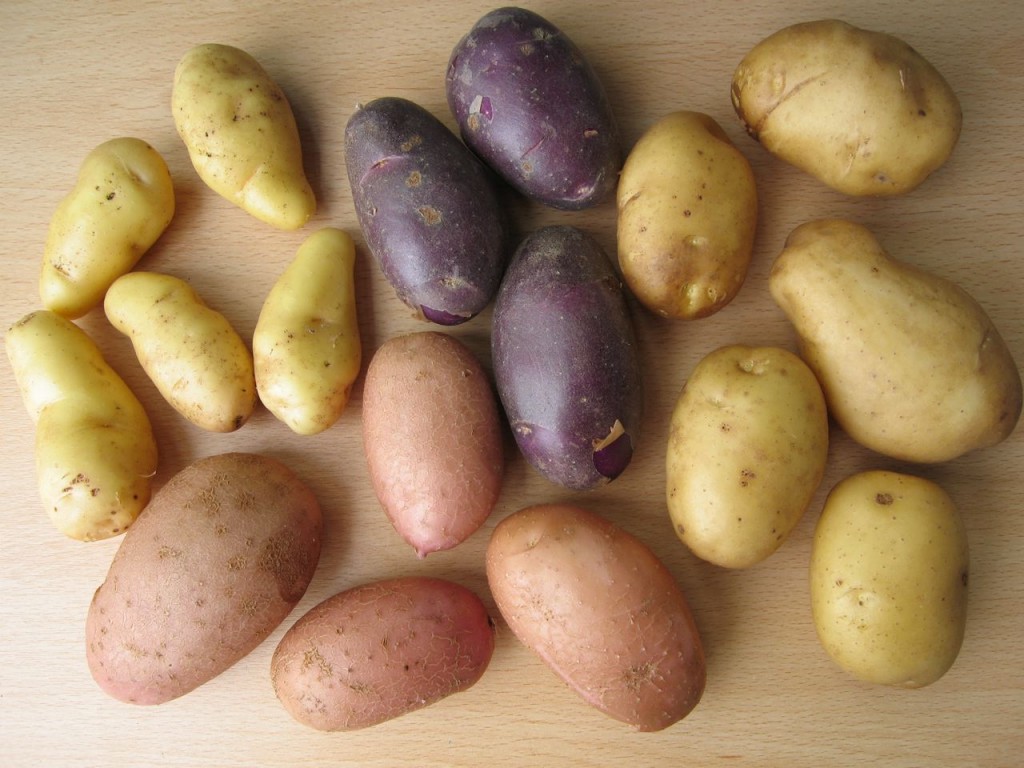 Bred by the Hungarian Sárvári family, using conventional plant breeding techniques, new Sarpo’s undergo rigorous trials run by the Sárvári Research Trust (SRT), near Bangor, North Wales, with UK-wide testing in the most blight-prone areas. Only after several years of assessment, and after gaining National Listing, are new varieties released.

Gardeners who have grown the firmly established Sárpo varieties ‘Sárpo Mira’ and ‘Axona’, both red-skinned maincrops, have said a welcome goodbye to late blight problems caused by the airborne fungal pathogen Phytophthora infestans. The spores land on the leaves and stems where they infect the tissues and cause rapid breakdown, seen as characteristic browning and blackening of the haulms.

With the Sárpos, the fungal spores still attack the plants, but their development is arrested and the plants keep growing long after other varieties previously recognised as ‘blight resistant’ have been defoliated. Spores can wash into the soil and infect the tubers. 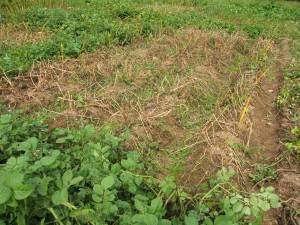 The field trials of the Sárvári Research Trust in August 2008. The brown, dead blocks are potato varieties which have already succumbed to late blight infection. The blocks of healthy green shoots are blight-resistant Sarpo varieties.

A visit to the SRT’s trials field in August was proof of the Sárpos resilience during another year of record ‘blight pressure’. Blocks of Sárpo plants were still growing strongly among those which had succumbed to late blight earlier in the summer, giving the trial area a striking ‘patchwork’ effect.

Currently, the only control for late potato blight (which can also affect tomatoes) is to spray repeatedly with synthetic fungicide. Organic growers can use, copper, a highly toxic substance in the wider environment.

With the need to produce food with a shrinking ‘carbon footprint’ becoming an ecological necessity, any crops which reduce energy demand will play a pivotal future role in home and field scale food production. The Sárpos are far less dependent on fossil fuels, primarily oil, than other potato varieties. The manufacture and use of synthetic fungicides, pesticides and herbicides, irrigation of crops, and refrigerated cold storage, are all energy-intensive processes which the Sárpos neatly sidestep.

This gives the Sárpos not just a smaller carbon footprint, it also brings a significant cost saving, as well as being a boon to low-carbon organic gardeners everywhere.

‘Sárpo Una’ has pink skins and is a second early, with good resistance to late blight and virus diseases. Used as a salad potato, or leave to mature and cook as a baker.

‘Blue Danube’ has white flesh beneath its eye-catching blue skin. An early maincrop with high resistance to tuber blight, blackleg and PCN Ro1.

• Keep up with news of new Sárpo introductions and forthcoming open days by following the Sarvari Research Trust blog, or by following on Twitter: @SarpoUK