Just how sustainable and climate-friendly your gardening is depends on what kind of sunlight you use to make it happen.

What kind of sunlight are you running your garden on? It might seem an odd question – sunlight, after all, is sunlight, surely? There may have been a dearth of its direct rays this summer, but it’s responsible for powering virtually all of life on earth. It’s what’s gently warming your greenhouse as you read this, and it’s what’s keeping your oriental veggies, among other crops, ticking over in these cool autumn days.

Sunlight is just one kind of energy that’s described as ‘renewable’; others include energy derived from the wind, waves and tides, all of which are in the news. What all these ‘renewables’ have in common is that they don’t rely on the consumption of finite reserves of oil, coal and gas. It’s these ‘fossil’ fuels that, when burnt to liberate their energy, release the pollutant ‘greenhouse gas’ carbon dioxide (CO2) into our atmosphere. As more CO2 builds up in the atmosphere, more of the sun’s energy becomes trapped, leading to global warming – the ‘greenhouse effect’. Tapping into energy sources that don’t increase atmospheric CO2 is crucial in helping to avert dangerous climate change. 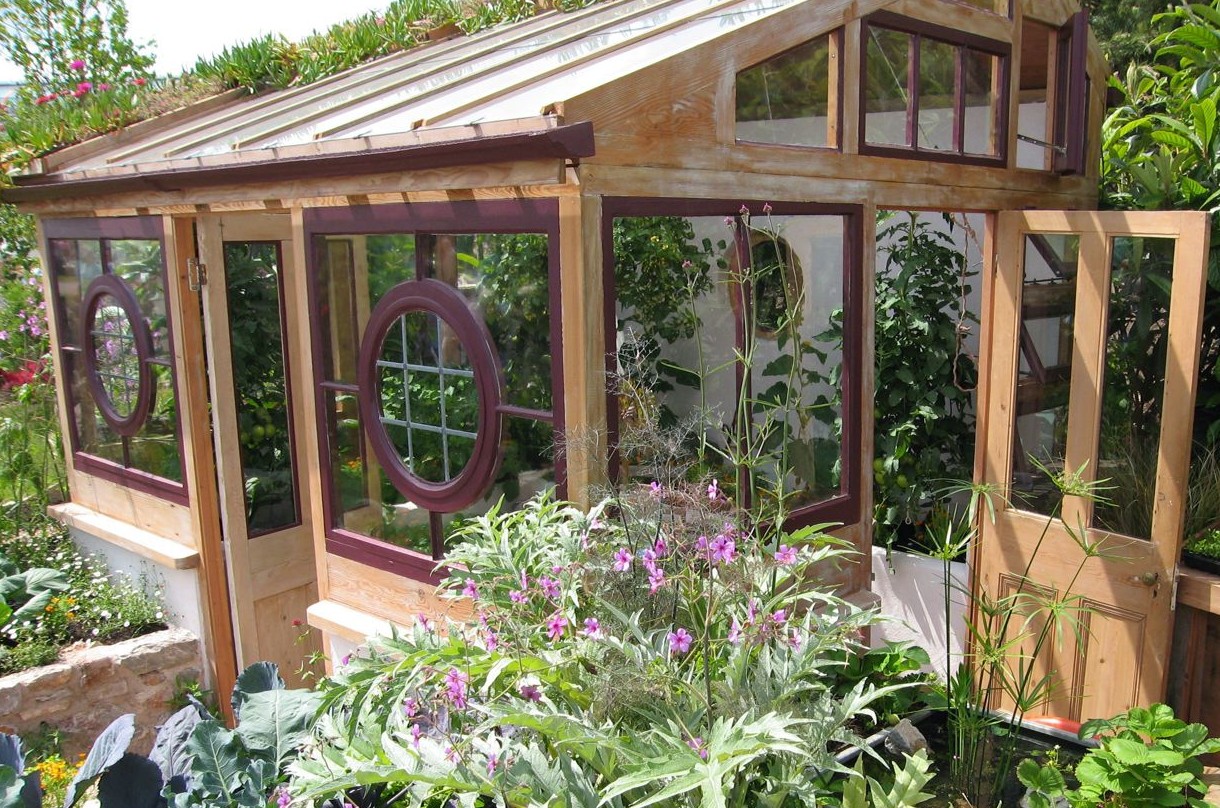 A greenhouse, especially one glazed with glass, captures and amplifies the power of renewable, current sunlight.

This, surely, must be great news for all gardeners. Doesn’t sunlight do more or less everything we need, and for nowt? After all, it powers the raison d’etre of gardening – it makes plants grow. So if gardening runs on this endlessly reliable and limitless form of energy, doesn’t that make it among the most renewable, sustainable and climate-friendly of all human activities? Well, it all depends on what kind of sunlight you’re using to help your garden grow. And you thought sunlight was simple.

There are two kinds of sunlight, usefully coined by the American writer Thom Hartmann as ‘current’ and ‘ancient’. Current or modern sunlight is that falling on your garden and warming your greenhouse or polytunnel right now; ancient sunlight is that which fell on earth some 400 million years ago, during the Carboniferous Period, and which became stored in plants as they grew in a carbon-rich atmosphere. This ancient sunlight drove photosynthesis, the process by which plants ‘inhale’ CO2 to make roots, stems, leaves, shoots and flowers.

Huge forests, reaching hundreds of feet into the air, grew up across the planet. As they died away, the carbon and sunlight energy became stored, over some 70 million years, in layers of rotting plant material often thousands of feet deep. Marine algae also trapped this ancient sunlight, combining it with CO2, before dying and sinking to the ocean depths. Subsequent geological upheavals, lasting hundreds of millions of years, saw these vast layers of plant remains sink, under extreme pressure, ever deeper into the earth. 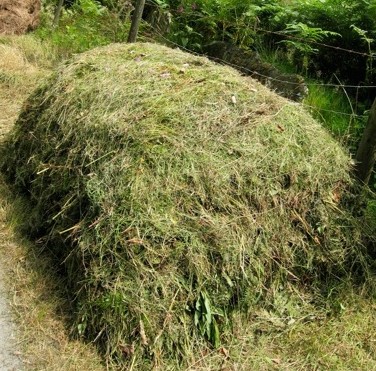 When I gather plant material, such as fresh bracken, to make a ‘hot’ compost heap, I’m actually harvesting current sunlight to help improve my soil.

We began living off the planet’s savings of ancient stored sunlight around 900 years ago, when humans discovered coal. Today, our lives are powered almost exclusively by ancient sunlight as we burn that vegetation which, through fossilisation, eventually became coal, oil and gas. Much of our energy-hungry gardening is also helping to deplete the planet’s sunlight savings. Synthetic pesticides and fertilisers are manufactured using ancient sunlight, polytunnels and plastic plant pots are made from it, while greenhouse heaters and petrol-driven lawnmowers burn it. Gardening relying on ancient sunlight could be described as non- renewable or ‘depletion’ gardening, whereas organic, earth-friendly gardening, powered by current sunlight, is the most renewable and sustainable way of gardening on earth. Imagine your garden or allotment as one big solar panel – akin to those increasingly seen on roofs for heating water. A solar panel absorbs free, renewable energy from the sun, heating the water circulating inside it. This heated water is then stored, in the simpler systems, in a lagged tank for later use. In our gardens, free and renewable energy from the sun is used by plants to fuel their growth and development – just like it was 400 million years ago. Those onions, potatoes and pumpkins, which we grew this summer and now have safely in store, are – like the hot water tank – filled with energy for later use (in this case, when we eat them).

Within your ‘solar panel garden’, there’s one super-efficient area where current sunlight can be made to work even harder: the greenhouse. Here, the sun’s energy can be captured to create a warmer, more sheltered growing environment as well as to power the growth of the plants themselves. In a greenhouse, current sunlight can be used to start seeds into life, grow plants to maturity, then speed ripening and harvesting. Even in the depths of winter, what little sun does fall on our plots works that much harder once it has passed through a pane of glass. If you have a lean-to greenhouse covering a sunny wall, you can paint the bricks black so they absorb the sun’s heat energy during the day, then radiate it back out at night. This is truly renewable greenhouse heating that avoids us having to reach for a gas bottle filled with ancient sunlight.

“Organic, earth-friendly gardening, powered by current sunlight, is the most renewable and sustainable way of gardening on earth”

Current sunlight helps us realise the guiding tenet of organic gardening: feed the soil, not the plant. When I make compost out of a mixture of bracken, grass and straw or old silage, I use plant material that might have captured current sunlight only hours before; when I gather leaves for my leaf-mould bins, I’m raking up heaps of current sunlight stored up over the summer in the soon-to-be-rotted leaves. When I spread the resulting compost and leaf-mould on to my soil, I’m using the power of current sunlight to improve that soil, to enhance and sustain its ability to grow healthy, nutritious crops, year after year, as the soil itself becomes a renewable resource. When I turn comfrey or nettles into liquid feed, I’m converting current sunlight into a rich and renewable plant food. None of these requires a jot of ancient sunlight. 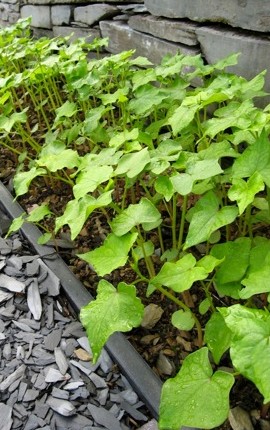 Green manures, like this buckwheat, are living ‘solar panels’ that make organic matter from current sunlight and carbon dioxide from the air.

Then there are the solar superstars at the heart of renewable gardening – green manures. From the moment they push their seed leaves into the light, green manure crops are capturing current sunlight and combining it with CO2 to make organic matter. Some, like clover and tares, also fix nitrogen from the air in their root nodules, releasing it later for leafy crops like brassicas to utilise. Others, like buckwheat, delve deep into the soil, dredging up valuable nutrients and bringing them within reach of our crops. All green manures help to improve the structure of the soil and build its fertility; some, like sweet clover, can even be cut and used as compost material. All we have to do, to set these amazing, living ‘solar panels’ to work, is to sow some seeds. Renewable gardening doesn’t come much easier than that.

Power generated from renewables currently supplies only a small percentage of our energy needs; the lion’s share still comes from the burning of ancient, fossil sunlight, and from nuclear power. But while it is unfortunately not yet possible to run most aspects of our lives on current rather than ancient sunlight, it’s reassuring to know that a vital renewable energy revolution has been quietly mobilising for some time.

Where? In our own back gardens, of course.