Calculating the ‘carbon footprint’ of individual products is becoming all the rage. In search of a carbon-neutral garden, what about applying the concept to our plants?

Is your garden costing the earth? This might seem a daft question to be asking the readers of a magazine propounding organic gardening, but it’s one all gardeners, whatever their environmental creed, need to be asking themselves – regularly and frequently. It’s a question I ask myself on an almost daily basis as I craft my new garden – but what gave me an extra jolt recently was reading the back of a crisp packet. 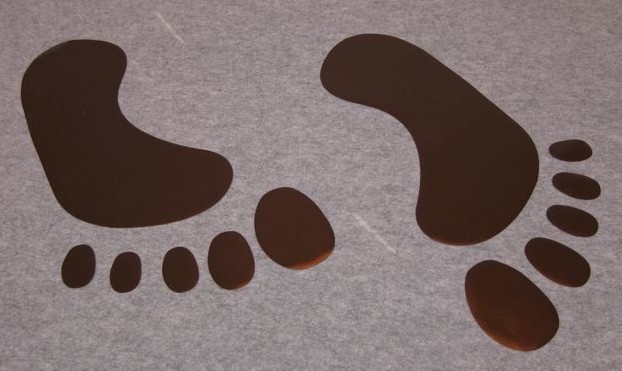 Does knowing the ‘carbon footprint’ of a product help us make ‘greener’ choices – and can it help us in the garden?

There have been a flurry of news reports in recent months about the so-called ‘green’ initiative, being driven by large superstores such as Tesco and Marks & Spencer, of sticking a ‘carbon footprint’ label on goods. Walkers Crisps are also in on the game; they’ve calculated that a packet of their cheese and onion crisps is responsible for a carbon footprint of 80g. In other words, to produce a packet of cheese and onion, from growing the potatoes right through to disposing of the empty packet, releases 80g of carbon emissions into our atmosphere.

The principal emission is of the gas carbon dioxide, which is released when we burn fossil fuels, and is the chief driver of global warming and, consequently, climate change. The idea is that calculating and showing a product’s carbon footprint will better inform consumers and allow them to make ‘greener’ choices. The seemingly logical thinking is that greener options are ‘better for the planet’, and so are a positive step toward mitigating climate chaos. I could, for instance, salve my conscience a little by choosing a brand of crisps made from organically grown spuds… but those I occasionally succumb to also come in packets that defeat even determined tiger worms.

“Forgive me here, but as you and I are in the game of growing plants, I can’t resist using the term ‘carbon rootprint’”

So, like me, you might be wondering just what the point is of using additional ink to print the carbon footprint label, when the ‘best’ option would be to not eat the crisps in the first place, thus reducing both demand for them, and for the energy needed to get them into my hand. Result: zero carbon footprint. After all, the green mantra runs ‘reduce, reuse and recycle’, with ‘refuse’ currently making an impressive bid for top spot.

Now being the sort of gardener I am – one who refuses to stick his head in the compost heap over the apparently blasphemous idea of connecting what we do in our gardens with the wider environment – I couldn’t resist wondering how this carbon footprinting idea would play out when thinking about my garden’s needs. Forgive me here, but as you and I are in the game of growing plants, I can’t resist using the term ‘carbon rootprint’. I am also modifying the Shorter Oxford Dictionary’s definition to ‘the amount of carbon dioxide emitted due to the activities, especially the consumption of fossil fuels, of a particular plant.’ This should, of course, be ‘person’, not plant – but bear with me.

Obtaining my plants by mail order means greater choice, less travelling and some bonus material for my compost bin – cardboard.

This autumn a plethora of fruit catalogues landed on my doormat, offering what is probably the widest range of soft and top fruit ever. I’m due to plant some new apples, along with assorted other fruit, and, a cup of tea or two into the ‘carbon rootprint’ thinking, a quite intriguing jigsaw formed in my mind. Intuitively, I know that my first and ‘best’ choice when buying a new apple is going to be one that’s been grown organically, and is ‘green-stamped’ as such by a certifying body such as the Soil Association.

“I do believe that aiming for organic every time, at least when buying stuff like fruit trees, really is the better option”

But if I start to push at the boundaries of simply wanting a one-year-old, bare-root maiden tree, on a dwarfing rootstock, that’s been grown organically, other factors kick in which will determine the carbon rootprint of that tree – whether it’s organically grown or not. These same factors will (or at least should) influence any future plans to hang a carbon footprint tag on plants.

For a start, where do I get the tree from? My gut reaction is to seek out the most local source, which steers me towards a nursery or garden centre. But where did it get its plants from? There’s a good chance they have been imported from the Netherlands, perhaps Belgium, probably in a rather large, diesel-guzzling lorry. When they get to the nursery or garden centre, staff will need to look after them. The staff will need to travel to work, and it’s a fair bet many of them use cars.

I would most likely use my car to get to the nursery or garden centre, which is unlikely to be accessible by public transport. (I’d be in quite a tizz anyway, worrying about breaking off next year’s buds, as I clambered on to a bus or train.) To boot, the chances are pretty slim of me getting exactly the variety and rootstock I want, grown organically, from a garden centre.

“If an organic supplier has just what I’m looking for, or at least a good substitute, then I’m nudging closer to the holy grail”

But what if the plant comes to me instead by mail order? Most seed and plant suppliers offer a range of fruit, but only a handful offer organically grown plants. If an organic supplier has just what I’m looking for, or at least a good substitute, then I’m nudging closer to the holy grail. And it gets better. If I’m ordering from a UK organic fruit tree grower, who propagates his own plants, the carbon rootprint of my apple tree starts shrinking rapidly.

Knowing my tree has been grown organically assures me it’s been raised without inputs of energy-intensive chemical pesticides and fertilisers. Packaging is likely to be minimal, probably a stout cardboard box packed with straw (both compostable), some string (reusable) to hold the shoots in a bundle, and a bag (recyclable) to keep the roots moist. 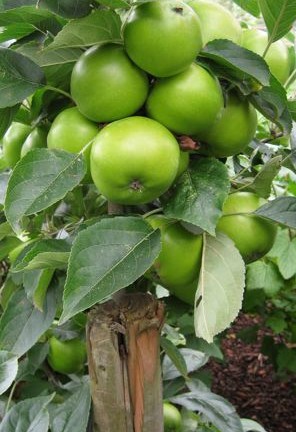 Buying my organically-certified apple tree by post cuts out any ‘middleman’ and helps to shrink my garden’s carbon footprint.

You could argue there’s less packaging involved in buying a plant from a garden centre, but the issue would hinge on how far you had travelled to find it, and how far it had travelled to get there. My apple will probably be packaged up on the nursery where it was grown, using its existing infrastructure, effectively cutting out the ‘middleman’ of the garden centre, and therefore the need to pack up the plants and transport them there. My tree will be delivered to my door, using an existing delivery network, without a turn of my ignition key.

Unlike Walkers with their crisps, I have no idea what the precise carbon footprint of my organic apple tree will be. I doubt anyone does, and I’m sure many elements of the not-so-green gardening industry would rather no one bothered to find out. But I do believe that aiming for organic every time, at least when buying stuff like fruit trees, really is the better option. Whatever scepticism you might harbour about the value of ‘carbon footprints’, especially on crisp packets, it is an intriguing and useful way of assessing how your garden’s ecological profile is shaping up.

Another ‘green’ term has recently entered envirospeak: ‘carbon positive’. Put simply, this means you offset more carbon dioxide in the course of an activity than you actually emit. How about local, organic food, grown just outside your back door, in season, incurring zero ‘food miles’, with no packaging, and using little if any fossil fuel? Sounds very positive. Sounds to me like organic gardening.

Did you like this? Share it:
Tweet
This entry was posted in carbon emissions, carbon footprint, climate change & global warming, energy use, environment, gardening footprint, organic gardening, packaging, published articles. Bookmark the permalink.