Centres For the Earth

As supermarkets eye up the ‘green pound’, what we need is not a monoculture of ‘Tescoised’ garden centres but local, diverse and distinctive earth centres.

By the time you read this, an unwelcome and alarming development for gardeners everywhere might be in motion. Rumblings in the world of high finance and cut-throat company takeovers this summer have had the horticultural industry on the edge of its garden bench. Garden centre owners across the land have been rubbing their clammy palms. Their delight has not been at bumper sales figures; after a promising start, when summer arrived in April, late July saw garden centres desperately flogging stuff off at half price after weeks of dismal weather and with unprecedented and catastrophic flooding in some areas.

No, the fat garden centre cats were celebrating for an entirely different reason; they were waiting to see if the supermarket Tesco had succeeded in its bid to take over the 21-store garden centre chain Dobbies. At the time of writing, there was something of a stand-off, with Tesco flexing its supranational muscle in order to gets its hands on a slice of the lucrative £5 billion UK gardening market.

The man with the clammiest palms is James Barnes, Dobbies’ chief executive officer, who is set to pocket some £10m. A sobering statistic in this unfolding saga is that the value of the proposed deal is equivalent to Tesco’s worldwide takings in a single day. Little wonder, then, that the fat cats spent the summer licking their lips in anticipation of their own call from Tesco. Let’s hope the phone did ring at Dobbies HQ – to say the deal was off. I won’t be the only one to breathe a sigh of relief if the creeping ‘Tescoisation’ of our way of life hasn’t yet reached my garden.

You might be thinking, ‘So what, that’s how the business world works.’ But let’s pause, and ponder just what a takeover by the retailer that already controls a third of the UK grocery sector, and takes £1 out of every £8 spent on the high street, might mean for our gardening industry and for our own plots. That no one has had the gumption to speak out against its impending Tescoisation is testament to the gardening industry’s supine ‘wait and see’ attitude. The lessons from town centres and communities across the land, already dealt a body blow by the relentless spread of out-of-town supermarkets, seem conveniently out of earshot.

“By the time you read this, an unwelcome and alarming development for gardeners everywhere might be in motion”

Supermarkets share many qualities with Japanese knotweed; they are tough, powerful, pernicious and, despite even valiant efforts, rarely go away. They are rooted deep in our retail culture, their feared shoots are pushing up everywhere, and once they get a stranglehold they threaten diversity. Go into a dense thicket of knotweed and you will find little underneath except a mat of dead leaves.

Modest independent garden centres and nurseries who see which way the wind is blowing must be quaking in their boots – although some still naively seem to believe that the Dobbies takeover will be good for business. Tell that to the many independent shopkeepers who shut up shop after a supermarket opened on the edge of town, to the suppliers who are ground down by supermarket buyers, and to the South African fruit pickers earning the equivalent of 38p for an eleven-hour day.

Two kinds of diversity are under threat if Tesco (or any other supermarket) gets its way – retail diversity, made up of smaller horticultural businesses throughout the UK, and the biodiversity found in our gardens, especially the organic ones. And it isn’t just Tesco sowing the seeds of corporate monoculture. Recently an eighth of the UK’s garden centres have been acquired by a single consortium of investors, including our biggest chain, Wyevale [now The Garden Centre Group]. Its chief executive described garden centres as “the last retail market in the UK yet to be consolidated and professionalised.” 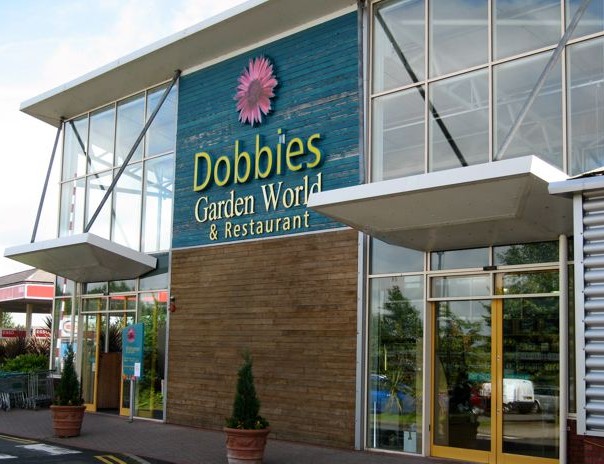 Supermarket giant Tesco is bidding to take over the Dobbies chain of garden centres.

Consolidated and professionalised? My dictionary defines ‘consolidate’ as ‘to combine into a single unit.’ What this means, for supermarket-driven garden centres, is that pretty soon each centre will look just like the next one. They’ll be selling exactly the same plants, the same outdoor furniture, the same range of pesticides. Whether you garden in Aberdeen or Reading (the northernmost and southernmost links in the Dobbies chain), you can have any plants you want – as long as they’re exactly the same plants as you could find in any other Dobbies.

I can’t think of anything worse, while loading up my boot at a ‘Tesco’ garden centre, than glancing around to see everyone else piling exactly the same items into theirs. Those last bastions of individuality, our gardens, are dangerously ripe for Tescoisation. I’ve never cared for the idea of marketing executives knowing the contents of my weekly shop and, curiously, I’m even less inclined for them to know what seeds I’ve chosen and which plants I’ve bought. I’ll decide for myself what my garden needs, not rely on being told by a computer milking information from a loyalty card.

Supermarkets wield so much power because they have, like Japanese knotweed, stifled and overwhelmed their competitors. As awareness of the ethically murky side to the supermarket business grows, it’s little wonder that, should the takeover go ahead*, Dobbies will not be changing its name or selling Tesco-branded products. How can we gardeners be sure that what we buy hasn’t been made by someone paid the same pittance as the South African fruit pickers?

The truth is we can’t – but we could if our everyday gardening needs were met locally, not just by independent garden centres and nurseries, but by an interdependent, nationwide network of ‘earth centres’. These antidotes to ‘consolidation’, which fattens the wallets of a few, would disperse knowledge, skills and local diversity to the many.

No two earth centres would be alike. They would be distinctive and rich in local organic horticultural knowledge. They would become regional gardening hubs, offering plant varieties proven to prosper (given the vagaries of climate change) in each area. They would bring gardeners together, not in the anonymous trolley-bumping garden centre way, but as a local community pooling and sharing its experiences. They would be modest in size and be sited where gardeners are, not marooned in bleak out-of-town car-dependent shopping complexes beyond the care of public transport.

They would reverse the rush toward profit-driven retail monoculture, working with local growers, craftsmen and artisans in a symbiosis that nourished local diversity in all its forms. They would be where future gardeners and growers received training in the skills required to bring about the vital re-localisation of our food supply. They would be paragons of sustainability and recycling, their credo to keep as many resources as possible ‘cycling’ locally. Their organic, ethical and moral credentials would be impeccable; the ‘p’ word (peat) would not be uttered.

Earth centres would be economically viable, but not necessarily profit-driven. What would drive them would be a growing backlash against the increasing Tescoisation of every aspect of our lives, a yearning for the friendly and familiar, a rejection of the soulless and impersonal. The only clamminess here would be the honest sweat on the palms of the folk running these centres for the earth.

1 Response to Centres For the Earth