Increasing attempts to discredit organic growing by chemical-happy spin-doctors point to only one thing: the pesticide manufacturers are well and truly on the back foot.

It’s a safe bet that a good proportion of readers of this magazine [Organic Gardening] have, at one time or another, taken some kind of political action – even just by sending a postcard to your local councillor or MP. And you’ve probably added your voice to a call for something to be stopped, better regulated, or researched and scrutinised before being unleashed upon the world – genetically modified (‘GM’) crops being a prime example.

So what sort of person do you think would pen the following, as they bemoan having to hand-pick caterpillars from their cabbages. ‘In the past, one spray of the right systemic insecticide at the right time solved the problem. The loss of these chemicals is due to draconian and expensive EU testing regulations… But I will be writing to my MP.’ Is this a flat-capped old curmudgeon who carpet-bombs his allotment with every pesticide under the sun, a novice plotter sold the ‘if it moves, kill it’ line, or a wishy-washy celebrity spluttering, ‘I only spray when I have to.’ The answer is none of the above. 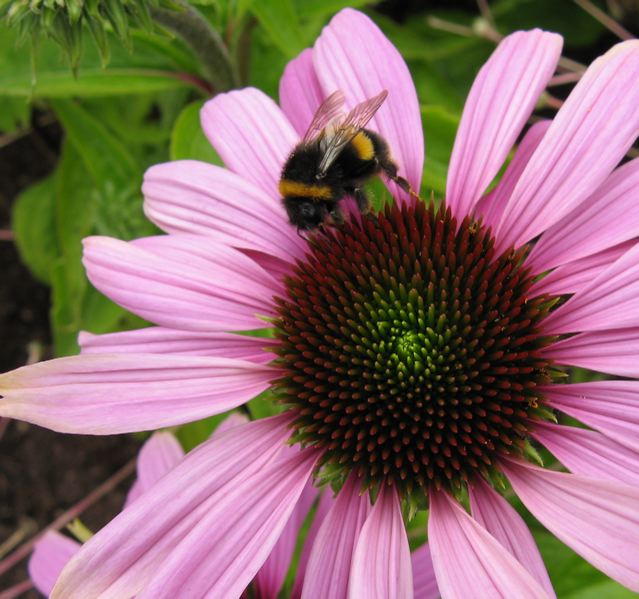 The use of imidacloprid, one of the man-made neonicotinoid insecticides found in many garden sprays, is regularly defended by gardening editors and pundits, despite its links with the declining health of bees.

These extraordinary comments were made on the pages of Amateur Gardening magazine, last autumn, by its editor. Just to avoid any doubt, Tim Rumball was writing to ask his MP to bring back garden chemicals which have been withdrawn under ever-tighter and increasingly planet-friendly legislation. The ‘systemic’ insecticides for which he pines are those that actually enter the sap stream of the plant. This means that they get inside the plants’ tissues and are absorbed into the leaves, flowers, roots and fruits.

The reasons for this sudden call to political action are limp. ‘The withdrawal of many systemic insecticides leaves me with the options of covering everything with fleece, which looks horrible; using vast quantities of contact insecticides; or just putting up with serious damage to a lot of crops. I do not have time to hand-pick caterpillars …’ Risking smugness, I think I have the answer to Tim’s troubles: start gardening organically. It’s got to be better than dousing your crops in man-made chemicals that get drawn into the heart of your crops – which you then put into your body.

We know that pesticide residues are commonplace in non-organic food, so it’s astonishing that so many garden writers and commentators – and magazine editors – seem hell-bent on discrediting organics at every opportunity. Recent months have seen an increasing number of vitriolic and often incredibly ill-informed attacks on organic growing. I wonder why.

The stance of Amateur Gardening can easily be explained. Throughout the growing season last year it was plastered with advertisements for garden pesticides containing such chemicals as glyphosate and imidacloprid – both examples of the systemics which its editor craves. To quote Upton Sinclair, an American author and investigative journalist, ‘It is difficult to get a man to understand something, when his salary depends on his not understanding it.’ This also sheds light on why many gardening celebrities remain vehemently non-committal on the subject of garden chemicals.

As awareness grows of the negative impacts that humanity is having on the ecosystems on which all life depends, it’s mind-boggling that anyone would be batting for more garden pesticides. But their manufacturers are big beasts in the gardening industry, with plenty of clout – and money. I also have an inkling, despite much-trumpeted sales figures, that they are well and truly on the back foot. As organic gardeners we need to make sure they stay there – and preferably tip over backwards.

Nothing is more counterintuitive than encouraging gardeners, especially new ones, to spray their food with a ‘systemic’ insecticide – one which invades every part of the plant, and will leave a residue that we eventually eat.

Being on the back foot might account for the virulent outpourings of perhaps our most un-green gardening writer, Peter Seabrook, who is as pro-pesticide, pro-peat and pro-GM as they come. Writing in his Amateur Gardening column last December, he says, ‘Organic is all very well for those of us either well off enough to pay the higher price or be prepared to grow our own and accept either more waste or lower yields … Growing organically at higher cost and with lower output is not an option for the majority.’ More waste? Lower yields? Higher cost? It doesn’t sound like the kind of organic gardening I know. I’m particularly intrigued as to what the higher costs of organic gardening are, given that we shun synthetic, energy-hungry fertilisers and pesticides, and have ‘thrift’ branded on to our tool handles.

“Harsh reality and pesticide propaganda are a potent mix”

But this naive sideswipe at organic gardening was merely camouflage for a more surreptitious plugging of, you guessed it, garden chemicals. Peter’s piece is entitled ‘Best of both worlds’, and it explains the practice of Integrated Pest Management or IPM, a technique used by growers which combines the use of naturally occurring bugs, bacteria and fungi with limited and targeted pesticide use. It’s a proven approach which works effectively ­– in the context of controlling pests and diseases affecting crops grown as large-scale monocultures, which as all organic gardeners know is simply asking for problems.

There’s no doubt that IPM is better than simply using pesticides as a matter of course, but the crafty aim of Peter’s article was to discredit organics by implying that the only sensible way to grow is by using some chemicals. It allowed the magazine’s front cover to shout out ‘Organic + chemicals = success!’, and it gave the editor a chance to rant, ‘The ‘don’t’ brigade annoy me – don’t use a hose, don’t use peat, don’t use chemicals!’, and to describe this apparently new frontier in pest and disease control as ‘brilliant!’. I just can’t help thinking that when pesticide residues are found in the bodies of species that have never been near our gardens, and when there are commercially proven alternatives to peat composts, it would seem common sense to join the ‘don’t’ brigade forthwith.

The most worrying and dangerous spin put on all of this is summed up by the caption below a picture of Peter Seabrook as he harvests lettuce. ‘I prefer my lettuce and other produce without slugs, caterpillars and maggots so I’m prepared to use pesticides on my edible crops.’ Peter obviously prefers the ‘supermarket look’ to slightly imperfect but residue-free.

“It is difficult to get a man to understand something, when his salary depends on his not understanding it.” Upton Sinclair

Interest from people wanting to grow their own surged last year; edible seed and plant sales have rocketed, while celebrities are jostling to be the new kitchen garden ‘expert’. This is largely good stuff, but be in no doubt that the chemical manufacturers are drooling even now as they eye up a new wave of gardeners who might help to shore up their flagging fortunes. I’m talking about enthusiasm-rich but knowledge-poor new gardeners, who are finding out the hard way that TV and magazine gardening is rather different from reality, and who are being drip-fed the message that organic gardening is expensive, means maggots and gives poor returns.

Harsh reality and pesticide propaganda are a potent mix; the quick chemical fix has much allure for the vulnerable, and it’ll be sold hard. As organic gardeners we need to expose the hollowness of gardening’s spin-doctors, challenge wishy-washy celebrities, and grow true to our beliefs. By example and by cultivating ‘greened-up thinking’, we can make pesticides history.