The right to grow your own food, free from contamination by pesticides or anything else, should be inalienable – but government proposals could undermine any such right.

Organic gardeners who have the misfortune to live next to non-organic farmland will be familiar with the following scenario. There you are, in summer, out in your garden, tending crops into which you have poured time, energy, enthusiasm – and love. Your patch of earth is buzzing with life, and there’s an almost palpable sense of ecological equilibrium about you. A sense of balance, of harmony. Then a dirty great tractor rumbles past, belching clouds of pesticide ‘drift’ that seep into every corner of your plot.

If you’re gardening in a town or city, there’s a shred of comfort to be had knowing that spray drift rarely reaches that far – yet the same thing happens if you have a trigger-happy gardening neighbour who’s intent on implementing a policy of ‘if it moves, kill it.’ In neither case is there any legal requirement for you to be told just what it is that is contaminating your home-grown food.

It’s a situation that’s as ghastly as it is outrageous, yet it happens to large numbers of gardeners (of whatever ilk) each year. But something even more outrageous and, in organic gardening terms, catastrophic, is on the horizon. Yet you won’t even know if and when this contamination has taken place. It won’t be announced by a thundering tractor, or by your neighbour’s frenzied pumping of his sprayer. 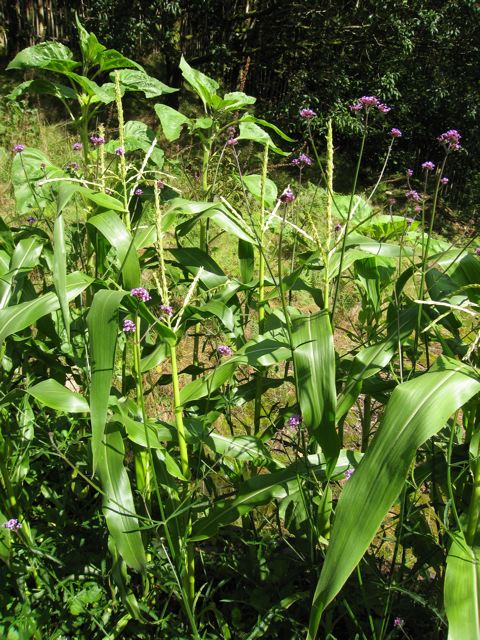 It’s entirely feasible that pollen from a genetically modified (GM) sweetcorn/maize plant could, being carried on the breeze, contaminate my garden sweetcorn plants (grown here interplanted with Verbena bonariensis and sunflowers).

No, this all-pervasive, insidious contamination will be borne on the breeze, or carried on the wings of innocents such as bees. This contamination has no smell, nor will you be able to see it. This contamination is microscopic, and it comes in the form of grains of pollen. Nothing unusual about that, you might think, except that this pollen has come from plants which have been genetically modified (GM). It’s not that long ago that an overwhelming consensus in the UK rejected the prospect of GM food derived from vegetable, animal or any other source. But the spectre of GM crops being grown here in the UK, within the next few years, is again casting a long shadow over our gardens and allotments.

In July 2006, the Department for Environment, Food and Rural Affairs (DEFRA) published their ‘Consultation on proposals for managing the coexistence of GM, conventional and organic crops’ [PDF]. This 92-page document (covering England only; other countries will follow) is available to anyone who wishes to comment on the dubious concept of ‘coexistence’ with GM crops (which so far include potatoes, maize, sugar beet and oilseed rape). The document concerns itself only with field-scale crop production; gardeners, organic or otherwise, do not get a look in. And why should they? After all, we’re only growing healthy food, incurring minimal or zero ‘food miles’, and, by gardening organically, collectively contributing incalculable environmental benefits.

In a nutshell, the proposals would allow for non-GM crops – including those we grow in our gardens – to be routinely contaminated by pollen from GM crops. The consultation seeks views on what measures are needed to allow GM crops to ‘coexist’ with conventional and organic crops, and on who is liable when farmers suffer economic damage due to GM contamination. Most worryingly, it is not asking how non-GM crops can be protected from GM contamination, because the government assumes that significant levels of contamination are acceptable. Indeed, environment minister Ian Pearson has said, “We should not kid ourselves that levels of nought or 0.1 per cent [GM contamination] are either practical or realistic.”

“The spectre of GM crops being grown here in the UK, within the next few years, is again casting a long shadow over our gardens and allotments”

Under European food labelling rules, ‘accidental’ contamination by GM material of up to 0.9% is allowed before food must be labelled as GM. Organisations such as the Soil Association and Friends of the Earth are drawing attention to the fact that the government has taken this to mean that 0.9% contamination in conventional, and possibly in organic, crops is acceptable. Again, all this relates to commercial crops. Who is looking after the interests of us organic gardeners, whose myriad patches of home-grown food surely deserve the same, if not greater, protection?

Certainly not the mainstream gardening press. At the time of writing I have not seen a mention in any other gardening magazine of the effects the growing of GM crops in the UK would have on our gardening nation – practically, emotionally or spiritually. But that’s no surprise; some of our gardening industry’s most vocal mouthpieces are aggressively pro-GM, believing that glow-in-the-dark roses, or evergreen lawns which don’t need mowing, are gardening’s final frontier. 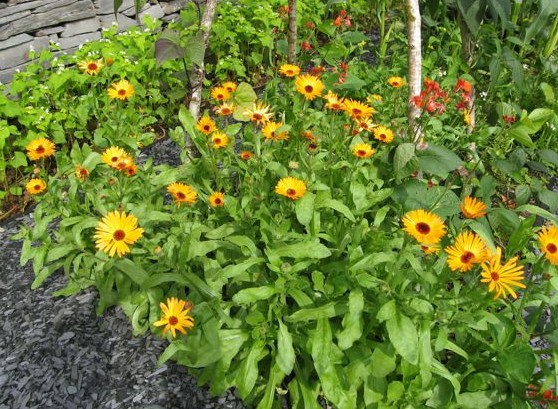 If genetically modified (GM) pollen finds its way into our gardens and allotments, carried either by the wind or by unwitting insects, our plots will still look the same, but we’ll know deep down that they’re not.

Another proposal in the government’s consultation concerns so-called ‘separation distances’ – minimum permitted distances between a GM and non-GM crop, which determine the level of likely contamination; the shorter the distance, the higher the contamination level. As an example, 110 m (362 ft) is proposed as the minimum separation distance between a crop of GM maize for human consumption and any adjacent non-GM crop of maize for human consumption. But what happens if I am growing sweet corn a stone’s throw from a field of GM maize? The pollen of sweet corn/maize is airborne (that’s why we tap the male flowers), and it can travel for miles on the wind. I haven’t a cat in hell’s chance of remaining uncontaminated. And as for percentage contamination …

“If GM crops are grown commercially in the UK it will change the nature of the world we live in overnight,” says Susan Kay-Williams, [former] chief executive of Garden Organic, the UK’s leading organisation for organic gardeners, which is currently formulating its response to the proposals. “A bee does not know which flower to go to to avoid pollinating a non-GM flower with pollen from a GM plant. Like the wind, which carries airborne pollen over huge distances, insects don’t observe ‘no-fly’ zones. If contamination from GM crops becomes a reality, we face a grave threat to both our vegetable heritage and to biodiversity in general.”

“If GM crops are grown commercially in the UK it will change the nature of the world we live in overnight” – Susan Kay-Williams, former chief executive of Garden Organic

I’ve always believed that being able to grow my own food was up there among the most inalienable of human rights. It seems I am wrong, and that even the most basic right – being able to feed myself on food that’s free from any kind of contamination – could soon be quashed.

The outcome of this consultation, if it should ‘open the door’ for the growing of GM crops in the UK, will have profound consequences. It will fundamentally change the way we perceive what drives us to garden organically. It’s possible, by taking extreme measures – such as moving house – to escape spray drift, but we can’t escape the pervasiveness of GM pollen on the wind. There will simply be nowhere to escape to. Yes, the garden might look much as it ever did, but we will know, deep down, that it’s not the same; that that patch of earth we felt was sacrosanct, is no longer so. From then on, there will be no such thing as organic gardening.

Did you like this? Share it:
Tweet
This entry was posted in ecological sustainability, food miles, genetically modified (GM) crops, greenwash, media, nature & the natural world, organic gardening, pesticides in the garden, published articles. Bookmark the permalink.