Any passing owl would have labelled me the ultimate peeping Tom. It was gone nine o’clock in the evening and the surrounding garden was caught in the spell of a sparkling rime frost, the grass crunching like a carpet of tiny eggshells. And there I was, peering wide-eyed through the hedge at the neighbours, with only starlight to unmask me. Inhaling the crisp air hinted at a temperature heading for -5C, probably lower.

Now I know it sounds far-fetched, but the reason for this foray into nocturnal voyeurism was that between me and the neighbours there was no glass. They weren’t sitting in their living room, or even in their conservatory (though that would have been bad enough). No, they were sitting outside; they were also having a barbecue. This was late November. How, and why? 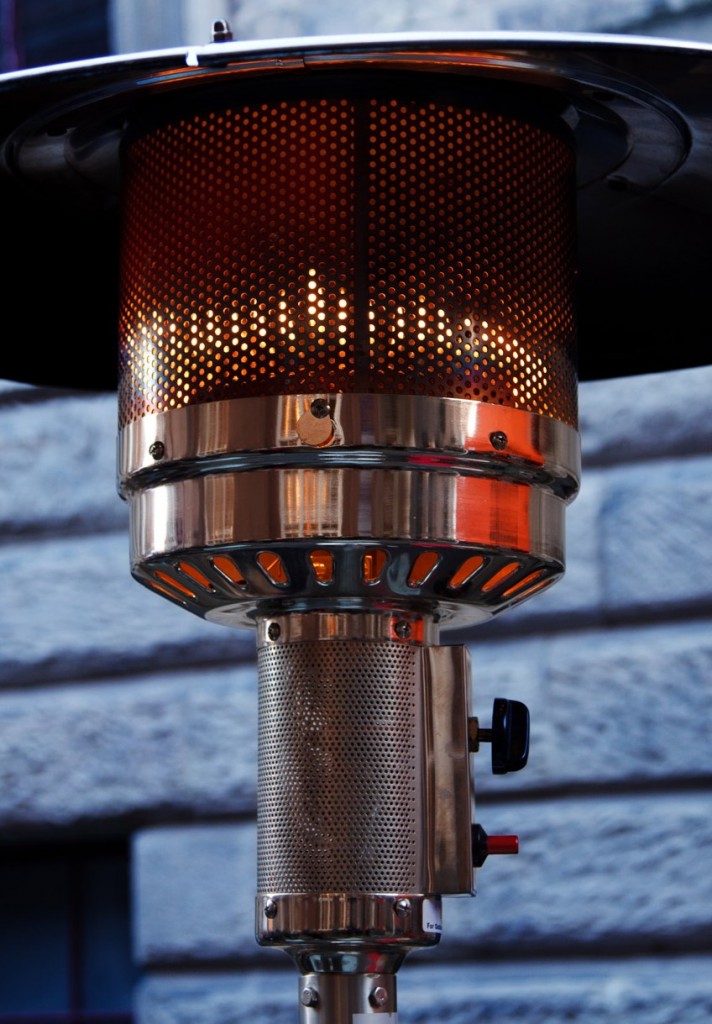 It’s gardening… but not as we know it. Whether you want to sit out on the patio during a winter frost, or keep the chill off your al fresco canapes, what you need – allegedly – is a patio heater.

The answer takes the form of a tall, shiny metallic beast standing around 2.25m (7ft) tall with a cylindrical base and flying saucer-like top. Inside the base is a can of propane gas – the sort campers use. Propane comes from oil and/or natural gas, and is a fossil fuel. Using a 12 kilowatt output model for two hours on its highest setting (essential on a freezing November night) releases around 5.2 kg of carbon dioxide (CO2) – equivalent to that released daily by a car during average use. Carbon dioxide is the most serious gas contributing to global climate change.

Most models can accommodate a 13 kg gas cylinder, and the government estimates that there are 630,000 of them in use in gardens, with up to 105,000 used in the ‘hospitality sector’, which boils down mostly to pub gardens (and this is a figure set to rocket in the wake of the smoking bans). You do the sums. Scary, isn’t it? Even our MPs are on to this one; questions asked in parliament have revealed that these ‘must-have’ garden gadgets have increased our emissions of CO2 in the UK by up to 380,000 tonnes a year. One MP has even suggested they be banned, or at least carry a ‘health warning’. As well as contributing directly to potentially catastrophic climate change, the things are grossly inefficient, with most of the heat heading straight into the atmosphere, accompanied by various unfiltered pollutants.

The patio heater has to be one of the most un-green of all the beacons of the ‘outdoor living’ phenomenon. It was painful enough seeing an immeasurable area of decent, fertile soil suffer death by decking in the wake of ‘Ground Force’, which arguably did more environmental harm than good, despite its bleating that it ‘got people gardening.’ Now we want to be out in our gardens all year round, whatever the weather, and be T-shirt warm to boot.

Some people do, at least. It seems that the frugal instincts of gardeners, especially us organic bunch, are being dwarfed by the prophets of profligacy, who exhibit a growing tendency towards ‘season denial’. The garden is an ‘extension of the home’ and it seems we must treat it – and heat it – accordingly. The neighbours, by the way, now square up to nature regularly, only being forced inside when it pours. Still, back indoors they might just snatch a glimpse on TV of our rapidly melting ice caps. 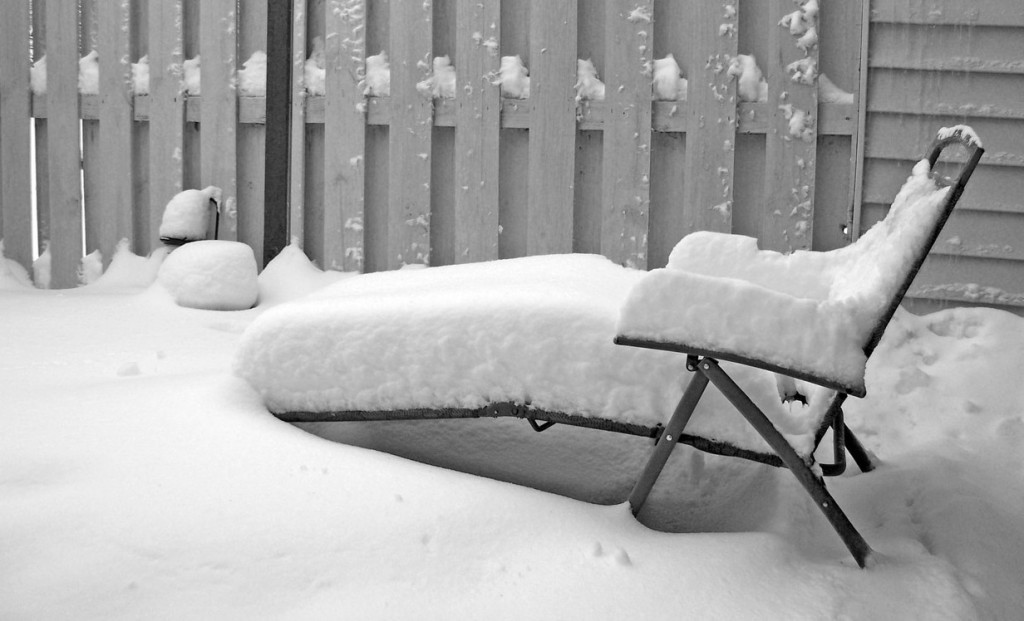 Winter is a time for retreating indoors to reflect on the seasons gone by, not for doggedly sitting outdoors come what may, with the aid of an energy-guzzling patio heater.

I’m no killjoy, but I’m all for curtailing our insatiable desire for unchecked pleasure when it’s quite literally killing our planet. This is outdoor living gone mad, and I seriously wonder if those living on ‘planet patio’ actually inhabit the same miraculous orb of interconnected life that I do. The greenest thing I can think of doing when the sun goes down is pulling on a jacket, and when that fails, going indoors. Simple, but entirely profitless – and there’s the rub. We’re brainwashed by glossy magazines and TV makeovers into ‘living’ outdoors and, unsurprisingly, we’re then handed a bottle of cheap fossil fuel to help us achieve it. Search the internet for patio heaters and the screen is plastered with them, many with prices around £100 and falling. You can’t help wondering, with a sense of ecological trepidation, what’s next. Now we’ve a way of heating the patio 365 days a year, all we need is for some bright spark to come up with a way of cooling it down. Funnily enough…

‘With world climate change giving us hotter summers, the English garden is becoming more of an extension of the home than ever before. The marketplace has seen a considerable increase in spend by the consumers (sic) to make their outdoor space a pleasing environment for entertaining, enjoyment and leisure time. Tropical plants now thrive in this more apt environment and offer glamour to the suburban garden.’ Enough. This is the opening shot from a firm encouraging us to start guzzling another natural resource – water.

“This is yet another example of the ‘gardening’ industry cashing in on profligate use of natural resources, while using climate change itself as a selling point”

Apart from being misleading – we may be going to experience colder, wetter summers; no one knows – this is yet another example of the ‘gardening’ industry cashing in on profligate use of natural resources, while using climate change itself as a selling point – all seductively packaged as another must-have accessory for outdoor living. 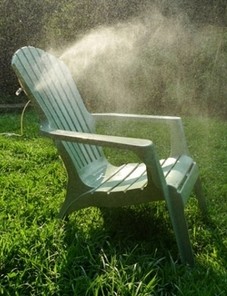 Foggy thinking: ‘mistscaping’ is an ‘innovative, must-have product of the future’ which will keep you cool whatever the climate change underway…

‘Mistscaping allows for the subtle introduction of fog/mist effects into any outdoor application, creating a relaxing ambience with the dramatic, physical cooling effects created by flash evaporation.’ Yes, now we can not only heat up the patio, we can use up precious – and in some areas, such as south-east England, dwindling – resources to cool it down. The mind boggles. This press release arrived within days of the reporting of the results from the first satellite study showing that the Antarctic ice sheet is in ‘significant decline’, releasing 35 cubic miles of water into the sea each year and helping to raise sea levels globally. So it’s a chilling irony, in every sense, that the company peddling ‘mistscaping’ is called Polar Microclimate (there’s even a firm called Arctic selling patio heaters). If hosepipe bans and compulsory water meters don’t put a stop to this madness, let’s hope common sense will.

But my fear is common sense alone won’t be enough, nor will it take hold in time. A peek into the average back garden suggests that many people have become so estranged from nature that the evidence against patio heaters and their ilk, as damning as it is, is falling on deaf ears. Encouraging a new wave of people to step into the ‘outdoor room’, which should have brought them closer to their gardens, and to nature itself, has backfired. If large numbers of them are prepared to send plumes of carbon dioxide into the air on sub-zero nights, and atomise drinking water into cloud fodder on hot summer days, at a time when awareness of environmental problems has never been greater, what hope can there be of every garden in the land becoming even a little more green.

I might just step up my peeping Tom activities. I’m going to keep peering through hedges, and I might even pluck up the courage to give those grilling themselves under a patio heater an eco-roasting. The first question I’ll be asking is, are you living on planet patio, or planet Earth?