Gardens in the Air

As the show season gets underway and entire gardens are flown in from the other side of the planet, has the UK’s leading gardening organisation lost the environmental plot?

By John Walker. Published in Organic Gardening, May 2006.

As I write, the moon floats imperceptibly across a cloudless blue sky. As ever, I’m entranced, wondering if I can really see it move. I can’t, of course, but below the moon, I spot something that does. It brings me back to my laptop with a bump – and to the very topic infusing my thoughts on this fine day.

For adorning the sky are the criss-crossing vapour trails – or contrails – of aircraft, which start their brief lives ruler-straight before crumpling before your eyes like worn-out paper chains. It’s hard to believe that these transient, beautiful sketches on the sky are also the unmistakable evidence of humanity’s most polluting and ecologically destructive mode of transport.

By the time you read this, the Chelsea Flower Show will be just weeks away. Much of the infrastructure of ‘the greatest flower show on earth’ will be in place. Countless tons of raw materials, let alone plants, will have been shipped on to the site, using vast amounts of fossil fuel. Yet the energy consumed on the ground will be as nothing compared to the lengths some exhibitors have gone to in order to stage a five-day wonder. 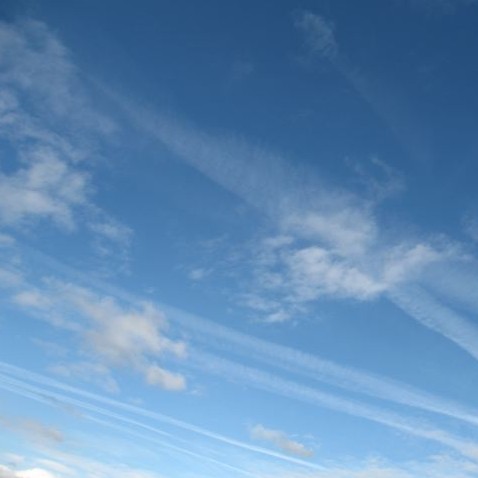 It’s hard to believe that these transient, beautiful sketches on the sky are also the evidence of humanity’s most polluting and ecologically destructive mode of transport.

Anyone beneath London’s major airport flight paths will already have had some of show passing, quite literally, overhead. For this year, the Royal Horticultural Society (RHS) – the organisers of Chelsea and most of the other major gardening shows – are boasting not one but two show gardens flown in from the other side of the world.

“It seems we are content, in Nero-like fashion, to carry on gardening while the world warms”

Fleming’s Nurseries, who are staging an ‘Australian garden’, are serial offenders, having exhibited at Chelsea twice already, but the real eyebrow-raiser this May comes courtesy of Tourism New Zealand’s ‘100 per cent Pure New Zealand Garden’. The press release boasts that, ‘Over 1,500 plants are being shipped to the UK, in five airfreight containers,’ on top of an equal number being sourced from Europe. Then there’s the ‘locally sourced’ rock, pebbles taken from ‘hilltop, river bed and coast’, and a dollop of ‘black sand’. All local to New Zealand, that is. The plants will be grown in ‘four cubic metres of fumigated potting mix’ and spend nine weeks in quarantine. On touchdown in the UK they will be grown on at RHS Garden Wisley.

It’s arguable that there is nothing inherently wrong with other continents showcasing their gardening expertise; we have all benefitted in different ways. I’ve been visiting Chelsea for almost 30 years and have enjoyed some sheer spectacles, both home-grown and international, but in those 30 years our ecological awareness has advanced dramatically. Only a hermit will not have heard of human-induced climate change, and we’re now warned almost daily by scientists the world over that we may be close to a ‘tipping point’ (the point at which our efforts to mitigate further climate change become futile) than ever imagined. So to be flying in gardens, not to mention the people to construct them, from the most distant places on the planet, is simply potty (the same applies to those well travelled plants and materials that end up in garden centres). Yes, it will fan the fickle flames of the media for a day or two, and massage a few egos, but it will also do its bit for global warming, and send out the message that it’s gardening as usual, whatever the environmental cost.

I felt duty bound to have a root around on the RHS website to get a feel for where the UK’s ‘leading gardening charity dedicated to advancing horticulture and promoting good gardening’ stands on such pressing issues as climate change. At the time of writing there isn’t a lot [it has improved since 2006]. Granted, there are a series of leaflets on ‘use of resources’ and ‘biodiversity in the garden’, which are undoubtedly useful, but there is nothing addressing the big issues of the day, nor anything connecting our desires and actions as gardeners with their impact on the world around us.

Then, on the home page of the site, the headline, ‘What cost the world in your garden?’ My heart raced. Could this be the RHS reaching its own ‘tipping point’? Was this the first step in a long, hard ‘roots up’ examination of the consequences, for better or worse, of gardening, and the effects of the industries that support it? Was it the opening salvo in a wider debate about the use of natural resources, energy consumption, the role gardening plays in stoking climate change, or how it might be harnessed to help mitigate it? No. This was actually a report from a conference where gardeners, scientists and policy makers discussed whether the increasing international trade in plants posed a risk of importing new pests and diseases. 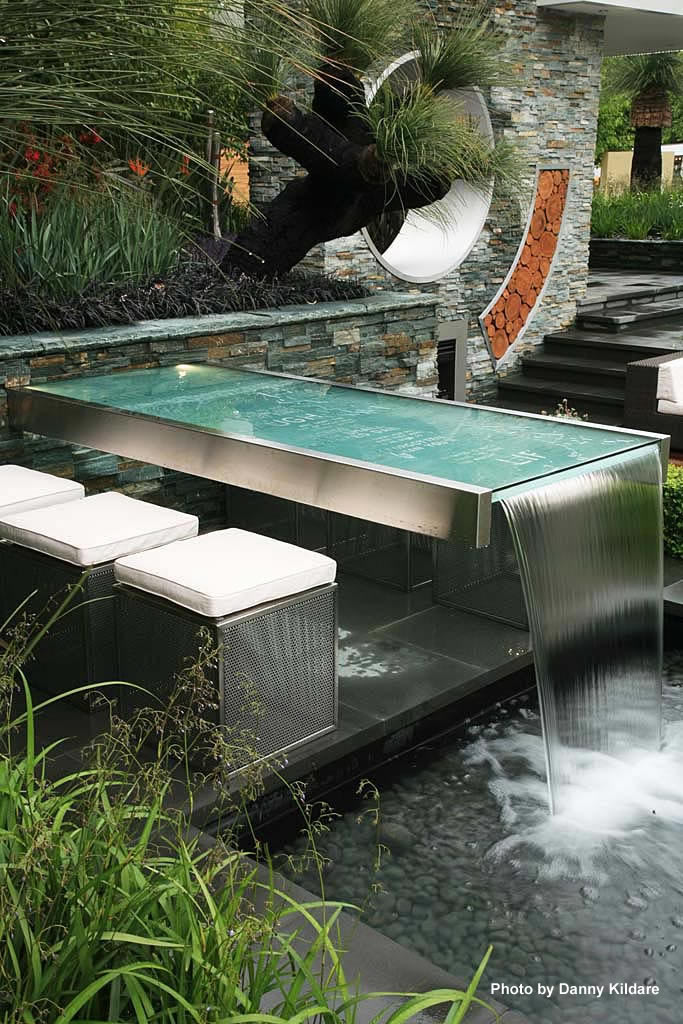 The Fleming’s Nurseries 2006 Chelsea show garden flown in from Australia, ‘…a tailored space that affords the atmosphere of the outdoors without the compromising of luxuries.’

That conclusion is blindingly obvious, but I checked through the conference summary and found not a single mention of the potentially far more devastating effects of moving plants around the globe by land, sea and air, which involves the guzzling of vast amounts of fossil fuel and the consequent belching of greenhouse gases. Clearly this wasn’t the remit of this gathering, but one might hope it would be a topic for discussion. It seems we are content, in Nero-like fashion, to carry on gardening while the world warms, demonstrating the same ecocidal tendency that flies in mangetout from southern Africa in the middle of our winter.

I have no axe to grind with the RHS. I am a member myself and have nothing but admiration for much of what they do to promote gardening. Their power to foster debate and influence thinking is awesome: when I last checked they had 360,000 members and (despite their lukewarm ‘policy’ on organics) a number of those, like me, will be gardening organically.

The reason I single them out is precisely because they have such huge potential to influence not only the gardening practices of their members, but of the entire gardening industry, both in the UK and further afield. They must also be in the spotlight because they organise, manage and set policy for our major national gardening shows, which, through the media, reach millions worldwide.

“Nothing on the RHS website addresses the big issues”

So just imagine the consequences of a new raft of review and reform of all the RHS’s activities. Imagine a seismic shift in their policy on flower shows, including the banning of show gardens from outside the UK. Gas-guzzling gardens from the other side of the world would stay firmly on the runway, as a new ‘sustainable gardening’ policy took root at the core of the RHS’s work. Discouraging the use of peat at its shows, which is already policy (and fiercely opposed by some), would be but a drop in the garden pond. Those harping for horticultural business as usual, who see nothing but ‘opportunities’ in climate change, would be swept away by a growing wave of ecologically enlightened gardeners stepping out on a more planet-friendly, organic path.

Will we see more air-freighted gardens touch down at Chelsea next year? Probably. Will the RHS seize the moment and steer the UK’s gardeners on to a greener path? Eventually, yes, either through taking the initiative or by bowing to the will of its members. Cynics may well be thinking that pigs might fly. Don’t forget that gardens already do.